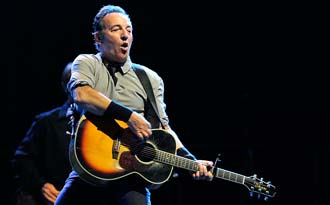 Expectant fans may have been kept waiting for 45 minutes, but you can guarantee that when Bruce Springsteen and the E Street Band completed their rock marathon of 33 songs three and a half hours later, not a single soul from the Millennium Stadium left disappointed.

From the opening strains of This Little Light of Mine through to the spine tingling finale of Thunder Road, the Boss had the enthralled audience wrapped a round his little finger.

At 63 years of age, Bruce is no spring chicken. He would be the first to admit he is no Usain Bolt when it comes to running all over the stage, but his soak-stained shirt was testament to the effort he was prepared to put in for his faithful fans.

In this age of blandness and fakery, the Boss comes across as someone who genuinely enjoys his job and his interaction with his fans is whole-hearted and sincere.

The show was only four songs in before Bruce collected signs from the audience for song requests. He broke new ground by choosing TV MOVIE – a world premiere. “You heard it first! You heard it last!” he proclaimed afterwards as his knowledgeable fans devoured every single note.

Fans were in dreamland when Bruce pulled off another coup by bringing the Animals’ Eric Burden on stage. Together they belted out We’ve Gotta Get Out of This Place to bring the house down.

The duo had only sung the 1965 hit together once before – in Texas last year – but it was the first time on the current Wrecking Ball tour they had combined to belt out the number.

Continuing at a frenetic pace, Bruce steamrollered through favorites like Cadillac Ranch, Pay Me My Money Down, Shackled and Drawn before launching into his 10-song encore.

Guitarist Stevie Van Zandt (he of The Sopranos fame) was joined by an admirer from the audience who jigged and jived with aplomb while Bruce invited other eager fans onto the stage to strut their stuff before plucking one lucky lady from the throng to dance alongside him. Affectionately they danced in unison as they disappeared into their own little world, ignoring the 30,000 screaming fans.

An emotional 10th Avenue Freeze-Out tribute to lost members Clarence Clemons and Danny Federici tugged at the heart strings before acoustic versions of Janey Don’t Lose Heart and Thunder Road signalled the end of a rousing, compelling and stirring concert.