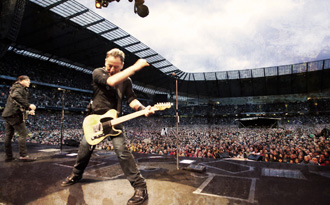 The Boss is back

The Boss and his E-Street Band are expected to be on fine form after an already successful year on the road with the Wrecking Ball Tour.

The tour celebrates Springsteen’s 17th studio album, Wrecking Ball, released in March 2012 and includes lead singles ‘Wrecking Ball’ and ‘We Take Care of Our Own’ which each received three Grammy nominations.

Tuesday’s gig will be the second time the rock legend has played the multi-event Millennium Stadium. Like Robbie Williams, Take That, Madonna and Oasis before him, the ‘Born to Run’ artist has played here before, packing out the stadium back in 2008.

The US rocker will perform in Cardiff just weeks after Rihanna wowed a 60,000 Millennium Stadium audience, heralding a sizzling summer season at the venue.

Venue Sales manager Alex Luff is confident the venue will be in tip-top shape for the next concert load-in which begins tomorrow when the touring production team starts to rock in from his Belfast gig. He said: “The Millennium Stadium has an excellent reputation within the live music industry for exceptional event delivery and it is for this reason that major artists and their promoters choose to bring their world-wide tours back to Cardiff.

“The city has enjoyed an exciting summer of events for 2013, with Speedway and Rihanna and now Springsteen and Cardiff Mardi Gras up next, and we’ve really showcased the absolute multi-functionality we have on offer here at the Millennium Stadium.”

As well as providing world-class entertainment, the health and safety of concert-goers is a major priority for event planners.

The Millennium Stadium’s maintenance teams are expected to dedicate upward of 500 working hours to ensure Wales’ biggest home of sport and entertainment is kept clean and tidy over the coming week.

Additionally up to 700 stewards and 500 catering staff will be brought in to look after Springsteen’s loyal fans on the night of the big event.

“The next few days will be busy as we work with the touring parties coming in from Belfast to set the perfect stage for the artist. Stadium staff will also be working hard behind the scenes to get the venue ready for the public, making their final checks over the weekend.

Mr Luff added: “If the concert in 2008 is anything to go by, it’s going to be a spectacular show and fans can be sure of a fantastic night out in Cardiff on Tuesday.”