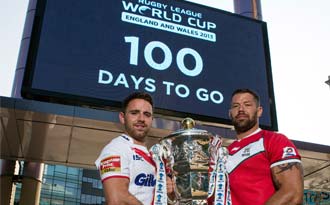 The home of Welsh rugby first hosted a World Cup of the Rugby League variety in November 2000 when Wales lost out to tournament runners-up New Zealand. The venue also changed codes for the Challenge Cup between 2003 and 2005 and has three times played host to the specular Millennium Magic for the inaugural event in 2007, again in 2008 and 2011.

Millennium Stadium management continue to work with RLWC2013 organisers, Welsh Government and Cardiff Council to ensure the Opening Ceremony is another spectacular occasion of sport and entertainment for Wales’ capital city.

Interim Stadium Manager Ian Peploe is certain the fans will not be disappointed. He said: “Since Rugby League Cup 2013 was announced for Cardiff preparations have been underway with tournament organisers, Cardiff Council and Welsh Government to ensure the Opening Ceremony is a successful event.

“Today, 100 days to go, is a reminder to the fans that the countdown is officially on and that all those with Rugby League World Cup 2013 tickets won’t be disappointed on Saturday 26 October.”

As the countdown continues for the pinnacle of the Rugby League calendar, fans are reminded that tickets for RLWC2013’s showpiece event in Cardiff are available now at www.rlwc2013.com

The eyes of the world will once again be on Wales in 100 days. Upwards of half a million people are expected to watch the 28 RLWC2013 matches live over a six-week period in the autumn with a further 20 million viewers from 120 countries tuning in around the world.

“We kick off at the Millennium Stadium with arguably the best fixture in international Rugby League. England against Australia always brings out the passion of both sets of fans and in the Millennium Stadium, under the closed roof the atmosphere will be electric for both the first and the second game when Wales take on Italy.”