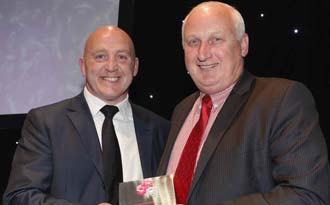 The Millennium Stadium was awarded for excellence in stadium management last night, as former General Manager Gerry Toms picked up an award for Lifetime Achievement at TheStadiumBusiness Awards 2013.

At the annual awards ceremony – which celebrates a range of achievements across the global stadium industry – organisers added an extra-special award for Mr Toms to pay tribute to seven years at the helm of stadium operations at the iconic multi-event stadium.

Ex-Ireland and Lions hooker Keith Wood surprised Mr Toms by presenting him with the prestigious Lifetime Achievement Award, on behalf of the organisers of TheStadiumBusiness Summit 2013, in front of some of the biggest names in international event management.

The former stadium leader had travelled to the glittering gala dinner at Emirates Old Trafford with stadium managers, after the home of Welsh sport was shortlisted in the Sustainability category – which this year went to Everton FC/Goodison Park.

“It was such a huge surprise to be presented with such a prestigious award and to be honest I’m still in shock,” Toms said this morning. “It’s been an incredibly memorable week after seven tremendous years at the Millennium Stadium, but this award is not just for me. The award is a tribute to everyone at work at the Welsh Rugby Union as it’s their hard-work and dedication that makes possible the hundreds of world-class events we’ve welcomed to Cardiff.”

Toms managed an impressive list of over 200 major events at the venue which is owned and operated by the WRU, before stepping down from his post at a spectacular Speedway Grand Prix event last Saturday (1 June).

Welsh Rugby Union Group Chief Executive Roger Lewis, who appointed Gerry Toms to join his executive team in 2006, said: “This is a fitting tribute to an excellent Stadium Manager whose decade of experience has contributed to the Millennium Stadium’s world-wide reputation as a must-play, must-visit venue.

“The award is a fantastic endorsement for the Millennium Stadium’s global credentials and it is fantastic that Gerry has been honoured alongside some of the biggest and most influential names in international stadium management.”