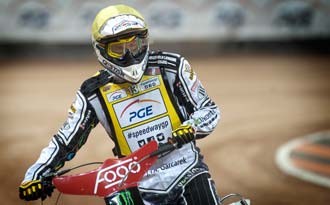 GP roars back to Millennium Stadium

Following another speedway spectacular at the Millennium Stadium last weekend, British FIM Speedway Grand Prix organisers have made a date to return to the multi-event venue in 2014.

The biggest motorsports event of next year will be held on Saturday 12 July at Millennium Stadium and fans can start making plans at once with tickets on sale now, priced from £29 for adults.

SGP are offering a 20 per cent discount on this season’s prices to fans booking their place at British and world speedway’s flagship occasion in Cardiff’s city-centre before August 31, 2013.

Over 38,000 fans flocked to the iconic sporting venue for last weekend’s grand prix thriller, and as a result Millennium Stadium Venue Sales Manager Alex Luff is expecting another bumper crowd for 2014.

“Speedway fans are already looking forward to July 14, 2014, when speedway organisers bring their flagship event back to Cardiff for the 14th Millennium Stadium event and with prices starting from £29 for adults, I’m sure they’ll be quick to take advantage of the early bird offers and book their place for another fantastic day out.”

BSI Speedway managing director Paul Bellamy is certain the 2014 British SGP will be even bigger and better. He said: “This year’s big night in Cardiff may be behind us, but work has already started to make July 12, 2014 a night to remember.”

Speaking of 2013 champion Emil Sayfutdinov and Britain’s World Championship-challenging superstar Tai Woffinden who will be battling to make sure he tops the rostrum next year, he added: “Emil certainly did the business on Saturday night, and Tai continues to do the Brits proud and establish himself as a genuine contender for the World Championship.

“This is the one SGP round every rider wants to be part of, and one they all dream of winning. The atmosphere generated by the British fans and the thousands who visit from all over the world is truly something special. Lining up in this meeting is one of the many reasons riders want to be part of the FIM Speedway Grand Prix series.

“I hope everyone takes advantage of the savings on offer between now and August 31. We’re already looking forward to it.”
Tickets are available from www.seetickets.com and www.speedwaygp.com  or by calling 0844 858 8879. International fans should call +44 115 912 9000.