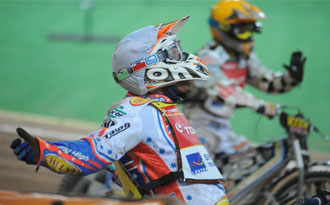 Millennium Stadium revs up for Speedway

The home of Welsh sport will get a Millennium makeover this week, as the countdown continues for the thirteenth British FIM Speedway Grand Prix event in Cardiff on Saturday 1 June.

Over 3000 tonnes of shale have arrived at the Millennium Stadium where preparations are well underway to construct a giant, world-class racing track where Wales’ hallowed rugby pitch, just over ten days ago, lay.

Under the management of former three time world champion, and Director of Speed Sports, Ole Olsen, Speedway’s specialists willcreate a 278-metre track for 16 of the world’s greatest riders to roar their 500cc bikes into town for the event on Saturday, 5pm.

Expert Olsen knows all about the need for a perfect surface to withstand speeds of over 70mph – with no brakes and no gears – and is looking forward to yet another spectacular Millennium Stadium event this weekend.

“This is the sport’s flagship event and is the one all the riders want to win.  It is a thrilling night of racing all under the spectacular lights and roof of the Millennium Stadium.  From the pre-event entertainment to the wheel-to-wheel racing and the fantastic closing ceremony and fireworks, it is a sporting event that no sports fan should miss,” he said.

“We kick off with a dedicated Fanzone in St Mary’s Street from 11 – 4pm with music, autograph signings, photograph opportunities amongst the attractions.  In the Millennium Stadium, our prevent entertainment includes Monster Energy athlete 13 x World Trial Champion Toni Bou as well as exclusive VT’s and audience interaction.  The Grand Prix officially starts at 5pm with 23 thrilling heats and I can assure everyone they will be in for a great night of motorsport in Cardiff.”

The greatest event on the speedway calendar was first held at Cardiff’s multi-event arena in front of over 30,000 fans in June 2001 and has attracted motorsport lovers back to the venue again and again each year.

No less than four world champions will compete in the 16 man rider line-up, including current champion Chris Holder from Australia.

British fans will be looking to get behind 22 year old Tai Woffinden – who is currently sitting just one point off the top of the championship table after four rounds – and wild card Chris Harris, who is the only Brit to have won the British SGP back in 2007.  The Grand Prix is held over a 23 heat format, where you do not know the winner until the final second.