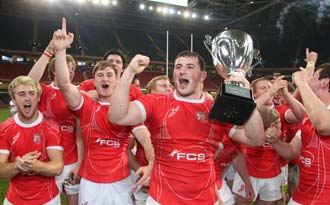 Cardiff University Director of Rugby Martyn Fowler says his young side have what it takes to secure back-to-back Varsity wins as he prepares his squad for the highlight of the students’ rugby calendar.

Fowler’s side take on Swansea University at the Millennium Stadium on Wednesday (KO 7.30pm) but with the core of last year’s side having moved on, there will be a number of new faces on show.

Last year saw Cardiff prop Jake Cooper-Woolley lift the Varsity cup following a crushing 33-13 victory. A repeat performance against what looks a strong Swansea side would be a fine achievement, one Fowler believes is entirely possible.

“We had a great Varsity warm up game last weekend which we won 47-5, scoring six tries,” said Fowler, who also coaches Principality Premiership side Cardiff.

“Even though we haven’t been great in the league, I’m not too worried about that. League form goes out the window in these sorts of games, especially on a big stage like Wednesday.  We’ve lost a number of players who graduated last year and we’ve got a new group made up mainly of freshers and first year students.

“Results have been disappointing but to retain our Premiership status has been massive given that we’ve got a young team. We are getting better and better.”

With Cardiff already fielding a young side, they have been dealt a further blow with captain Ross Wardle unavailable for Wednesday’s game. The giant centre and pharmacy student has made huge strides this season, first with Premiership side Bedwas, then with the Newport Gwent Dragons. Indeed, it was his vital late score which secured a win for the Dragons over Munster at Rodney Parade last Friday.

Wardle’s progression shows the strength of talent on show in the Varsity fixture, Alun Wyn Jones and Dwayne Peel examples of players who have played in the fixture and gone on to represent Wales.  And although Fowler is without Wardle on Wednesday, he is able to call on the likes of Arthur Ellis, who has played regional rugby with the Ospreys, and Nic Huntley, a veteran of the Varsity fixture.

“The squad are full of enthusiasm and if they take that into the game on Wednesday then we’ll do well,” said Fowler.  “A number of our boys have been involved in Premiership rugby so we haven’t played as a group for a long period of time. But we’ve had a month together now and we’re getting there.

“Swansea are going to be a real tough opposition. They’ve got a number of Wales Under 20 players and I think Nicky Thomas is definitely one to watch out for, I’m a big fan.

“They are going to be a big test but we are going to try and play and give the game width. The Varsity match is very much a shop window for these players and they’ve got a great opportunity to play at the Millennium Stadium and live on S4C.”

While Cardiff University are much changed from last year, the same too could be said for Swansea.

“We’re in a similar position to Cardiff with a lot of younger players,” said their head coach Richard Lancaster. “But we are looking pretty strong and most of the boys have played Premiership or regional rugby so all in all, I’m really happy. We’ve trained well and are ready to go.

“A few of our squad have played for Wales Under 20, they are quality players and will be key for us tomorrow.”

Two of those players with international experience are Thomas and full back Dion Jones, both of whom featured for Wales in this year’s Six Nations. They look set to make a big impact from the bench while Swansea are led by Bridgend skipper Jon Vaughan with Lewis Rawlins from the Scarlets academy at lock.

“Cardiff dominated the breakdown last year and that’s going to be key again this time,” said Lancaster. “Cardiff are well coached and have a great set piece so it’s vital we get parity up front. We will have a real challenge to get possession but if we do that then we should come through comfortably.”

Whatever happens in tomorrow’s match, the breeding ground of young players in education looks in good health.

“There’s no better time to play rugby in Wales while studying in education as well,” said Fowler.  “With the Colleges League and then with Welsh Universities and the Varsity match, there are the opportunities to develop through a non-academy environment. It’s great for the game in Wales.”

Tickets to support both Cardiff and Swansea at the 2013 Welsh Varsity are priced at £12.50 for students and £15 for non-students and will be available from the WRU store on Westgate Street tomorrow from 12 noon until kick off.