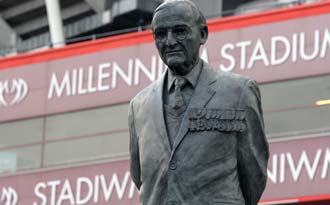 Two Welsh Army battalions will pay tribute to former President of the Welsh Rugby Union, Sir Tasker Watkins, when they go head-to-head on the rugby pitch at the Millennium Stadium.

Soldiers from a combined Royal Welsh team will face up to a XV representing 1st Battalion Welsh Guards tomorrow at 7pm to mark the inauguration of The Sir Tasker Watkins VC Welsh Infantry Cup.

Sir Tasker Watkins VC, who died in 2007, was the first Welshman to be awarded the highest award for gallantry for his actions during World War II.

He was President of the Welsh Rugby Union from 1993 until 2004 during 11 years which saw the game turn professional, the four Welsh Regions formed and the Millennium Stadium built. His statue stands prominently at the Westgate Street entrance to the stadium.

Members of Sir Tasker’s family will be guests of honour at the game which is hosted by Welsh Rugby Union as part of the Millennium Stadium Community Events initiative.

A Millennium Stadium spokesperson said: “We are delighted the stadium’s Community Events initiative continues to support excellent causes in our local communities by offering the world-class facilities free of hire charge. We look forward an exciting rugby game tomorrow evening, a fitting tribute to a great Welshman and all of the Welsh soldiers taking part.”

A number of the players will have served in Afghanistan on the recent Operation Herrick 16 tour – a tour which contained more Welsh troops serving together than at any time since the 1950s.

More information regarding the Millennium Stadium Community Event initiative can be found here.