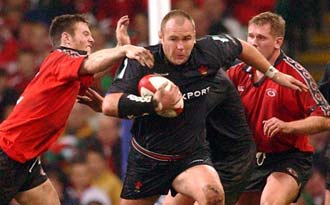 Former Wales captain Scott Quinnell has said he is looking forward to heading to the venue he rates as ‘the best stadium in the world’ for his very own WRU Rugby Legends Tour this Thursday evening.

The British & Irish Lions, Wales and Llanelli star will share his greatest rugby stories with his biggest fans for his very own tour of the Millennium Stadium on Thursday 11 April.

The legendary No 8 will treat fans to a unique behind-the-scenes outing at the national rugby stadium and relive his greatest memories of wearing the national jersey of Wales.

The route includes the home changing room, the players’ tunnel and the prestigious President’s Box where there’ll be a Q&A session full of all the best rugby anecdotes.

“I’m very fortunate to have played at the Millennium Stadium,” he said. “For me it’s the best stadium in the world and I’m looking forward to sharing my memories with everyone that wants to come and experience what it’s like to be player for the day.

“I always recommend that rugby fans take advantage of any occasion where you get to set foot in the Millennium Stadium and I guarantee the hair will stand up on back of your neck!” He added: “On the Legends Tours we’ll definitely have some fun along the way.”

Quinnell is one of a series of rugby legends ranging from the golden era of the 70s to current Grand Slam champions to show off the home of Welsh sport to rugby supporters.

Gareth Edwards, Phil Bennett and Shane Williams have each hosted their very own tour at the iconic venue, with Jonathan Davies set to take centre stage tomorrow evening.

Limited availability for Scott Quinnell’s Rugby Legends Tours package can be snapped up at millenniumstadium.com priced at £82 or £150 for two.

Fans can also get their Millennium Stadium Trophy Tour tickets online now and ensure they get their pictures taken with the RBS 6 Nations trophy at the venue which hosted Wales’ thrilling Championship win over England last month.