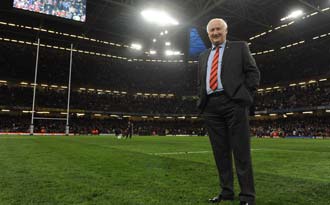 The Welsh Rugby Union has begun its search for a new stadium manager and confirms that Gerry Toms will be stepping down from his post in June 2013.

Following seven years in charge of operations at the iconic rugby stadium, the former Chief Superintendent of South Wales Police has decided to call time on his executive duties and make way for a new Stadium Manager.

Mr Toms was appointed by Roger Lewis, Group Chief Executive of the Welsh Rugby Union, in 2006 and joined his Executive Team. Toms has since managed an impressive list of over 200 major events at the must-visit venue, which is owned and operated by the WRU.

The stadium chief will now tackle his final rugby event on Saturday 30 March when Judgement Day – the inaugural double-header battle of East v West – comes to the home of Welsh sport.

Mr Toms will bid his final Millennium Stadium farewell after the FIM British Speedway Grand Prix on Saturday 1 June, going out with the distinctive bang of Speedway’s world-class firework display.

“There is no doubt that the Millennium Stadium is one of the world’s leading sports venue and one would be hard pushed to find a venue with such a diverse events programme as we experience here in Cardiff,” said Toms.

“Since the stadium opened in 1999, working with the Welsh Government and City Council, the Stadium has achieved its objective in bring the world to Wales delivering over 300 International events. It has been a great pleasure to have been involved with the stadium for the past 12 years working alongside a team of such talented and committed staff.”

Gerry has made his decision to retire from the management role to concentrate on a range of stadium safety and management related opportunities. He added: “I am looking forward to the challenges of the future and not least the opportunity to return to the stadium, occupy a seat and watch a game as a Welsh fan for the first time.”

Gerry has been heavily involved at the Millennium Stadium since it first opened in 1999; as Commander of the Cardiff division at South Wales Police and later joining WRU staff as Safety Officer in 2002 and Operations Manager in 2005.
Roger Lewis, GCEO for the WRU, said: “Gerry has been a key member of my Executive Team for the past seven years. I have greatly valued his wise counsel and support. I’d like to thank Gerry for his vital contribution to the business and pay tribute to him for over a decade of experience which has influenced the Millennium Stadium’s reputation as a world-class must-play, must-visit venue.

“Joining the Millennium Stadium from the chief position at South Wales Police, Gerry brought a unique insight and experience to the role and he will no doubt leave some big boots to fill. On behalf of everyone at the Welsh Rugby Union, I wish him all the best in his future endeavours.”

Lewis added: “The stadium is the jewel in the crown of Welsh rugby and the recent 6 Nations Championship, attracting over 74,500 visitors and in excess of nine million TV viewers, will no doubt go down in history as one of our nation’s greatest games.

“We could not have asked for a greater endorsement as we begin our search for a new Stadium Manager. I look forward to welcoming applications from high-caliber industry professionals wanting to be of our future, which includes two major concerts this summer, the 2013 Rugby League World Cup opening ceremony and, in the not so distant future, the 2015 Rugby World Cup.”