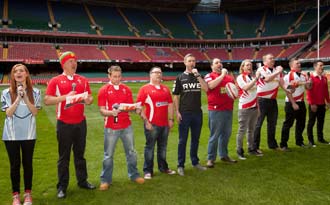 The Welsh Rugby Union will distribute 100,000 song sheets to fans ahead of the RBS 6 Nations decider against England at the Millennium Stadium on Saturday.

Nationalistic fervour is building towards frenzy status throughout Wales as the rugby side prepare to defend their 2012 title against Grand Slam chasing England.

And the WRU is taking steps to try to harness the power of the most ardent fans in world rugby and channel that energy towards anthem time creating a cacophony of noise in support of Wales from kick-off at 5pm.

The song sheets detail the words to the Welsh national anthem (Hen Wlad Fy Nhadau) and traditional rugby hymns Bread of Heaven and Calon Lan and the union is calling on fans to belt out the songs and show their support for 80 mins on Saturday as Wales attempt to overturn a points difference of 7 (or 8 if the visitors go ahead by 2 on try count).

The campaign, supported by SWALEC, was given impetus when a selection Welsh artists renowned around the world of Opera and on the West End stage gave a preview to the moment national enthusiasm will be at its most intense on Saturday, by re-enacting anthem time on the Millennium Stadium pitch.

All the singers are closely linked to Welsh rugby and they appeared in the Regional colours they will wear when they sing on Judgement Day (Saturday 30th March) – the regional double-header to be played out in a fortnight’s time, which will re-unite the Welsh national squad at Millennium stadium albeit on opposing sides.

Opera star Wynne Evans, West-End sensation Sophie Evans, Only Men Aloud singer Wyn Davies and Welsh band the Tenors of Rock all lined on the hallowed turf to put themselves in the position of the Wales players on matchday and belt out Hen Wlad Fy Nhadau.

“Everyone talks about the positive impact the crowd can have on the pitch because it is true,” said North speaking today from the national squad’s training camp at the WRU National Centre of Excellence, Vale Resort Hensol. “It makes such a difference the players to be able to hear your home fans in full voice on a match day.

“We know going into every game that we have hundreds of thousands of fans behind us, we know we have the best fans in the world game in Wales.Looking up to a sea of red in the stands on Saturday or catching site of the good luck messages sent to us via social media or from our friends and family is an inspiration and we are all looking forward to taking that out on the pitch at the weekend.”

The song sheets initiative is part of a wider WRU campaign to capture the mood ahead of the Six Nations climax in Cardiff this weekend.The Union is also calling on the nation to wear Wales shirts, or anything red, to work this week with pride as Welsh rugby is undertaking a double assault on the Six Nations Championship with the U20s, at Parc Eirias in North Wales, eyeing a Grand Slam of their own in the corresponding age grade fixture this Friday night.

Using social media channels, or by emailing us, fans are being asked to take pictures of themselves wearing the red of Wales and record film clips which correspond to the WRU’s ‘we are one’ campaign (available on youtube http://www.youtube.com/watch?v=CYqk87vhaR4) which aims to show the players that the nation is united in its support of their bid for Championship glory.

WRU chief executive Roger Lewis said: “The unity of purpose displayed by our national team during this campaign has been uplifting and inspiring.This strength of rugby character has been recognised by the whole of Wales. Now this vocal display of choral unity from our fans, will show the world just why it is so wonderful to be Welsh.”

Huw Lock, SWALEC sponsorship manager, said: “We will be cheering on Wales all the way this Saturday. As National Community Partner of the WRU, SWALEC supports Welsh rugby from the grassroots up and look forward to hearing the Welsh fans in full voice this Saturday at the Championship decider.”