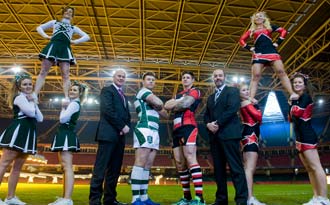 The Welsh Rugby Union has confirmed the 2013 Welsh Varsity fixture will take place at the Millennium Stadium on Wednesday, 24 April, kick-off 7.30pm.

Reigning champions Cardiff University will bring their home fixture to the iconic stadium to face Swansea University for the showpiece event of the annual Welsh Varsity sports day.

The rugby showdown has attracted a record 30,000 fans to the home of Welsh sport since the inaugural Stadium event in 2011, with Swansea and Cardiff claiming respective victories.

As some of Wales’ finest student rugby talent gear up for the 2013 clash, WRU Head of Rugby, Joe Lydon, is thrilled to support the return of the event which has featured Wales and British and Irish Lions stars Alun Wyn Jones and Jamie Roberts.

“Our university teams represent future talent across the breadth of Welsh rugby and it gives me great pleasure to support a third Welsh Varsity at the Millennium Stadium,” said Joe Lydon, who is charged with overseeing the Development & Performance rugby pathway for the WRU.

“The Varsity programmes offer the opportunity for players, coaches, volunteers to take part and hopefully continue to be involved in and support the game. As such university rugby plays a significant role in safeguarding the future of the game in Wales.”

He is looking forward to another spectacular student rugby extravaganza this spring, adding: “Local rivalries always make for exciting rugby occasions and Cardiff v Swansea on Wednesday 24 April is guaranteed to be another fantastic game.”

Former Wales international and Swansea University 1st XV member Paul Thorburn will also be keeping a keen eye on 2013’s student stars as he takes up a new role as Welsh Varsity Chairman this month.

He said: “There has always been strong rivalry between these two great rugby institutions however nowadays the fixture has the added spice of attracting close to 20,000 spectators. The occasion is a must for all rugby lovers, not only because of the carnival atmosphere, but also because of the style and manner in which the game is played. With the teams less reliant on inflexible patterns often associated with the professional level, the crowd will be entertained with a far more instinctive approach, which is refreshing.”

Welsh Varsity has grown year on year since it began in 1997 and matches were held alternatively at Cardiff Arms Park and Swansea’s St Helens. The match has been played on neutral ground since 2003, at Bridgend’s Brewery Field, Swansea’s Liberty Stadium and the Millennium Stadium.

With just over three months to go until the big day in the city centre, Welsh Varsity organisers are expecting tickets to be snapped up quickly by students, alumni and rugby fans.

A spokesperson for the Welsh Varsity teams said: “The atmosphere in the Millennium Stadium during the 2012 Varsity match was electric. There’s a healthy rivalry between Cardiff University and Swansea University, and students relish the opportunity to see their peers take to the field in such a prestigious venue.”

Tickets are on public sale now priced at £15 and £12.50 for students. Further information can be found at https://welshvarsity.com/