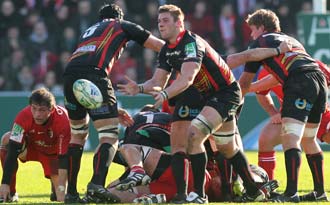 Wales and Newport Gwent Dragons star Dan Lydiate wants to reignite some Millennium magic as he targets his return to what he calls the ‘best stadium in the world’ next month.

The international flanker hopes to re-join the current Grand Slam Champions for their 2013 RBS 6 Nations Championship home games against Ireland and England but Lydiate also has one eye on ‘Judgement Day’ – the new double header derby day – at the Millennium Stadium.

The Dragons will face the Scarlets and Cardiff Blues will play the Ospreys in back-to-back fixtures at the home of Welsh sport on March 30 and Lydiate will be hoping to make it a stadium hat-trick.

“I love playing at the stadium and I think it’s the best stadium in the world,” said the blindside specialist who suffered a serious ankle injury playing for his region against Edinburgh in September.

And just one week after Wales complete their RBS 6 Nations Championship, Dan is expecting the Millennium factor to bring out the best in Welsh rugby when the East sides meet West.

“The Millennium Stadium factor is going to play a massive part in Judgement Day,” he added. “As players, you can’t fail to give that little bit extra every time you run out there.  The games will be really exciting to play in, they’ll be physical and they’ll be tough.

“I’m sure all the teams will be looking forward to playing at the Millennium Stadium. For some players it will be their first chance to play there while for others it’s a chance to go up against their national squad team-mates and play on the hallowed turf once more.

“A double-header at the stadium makes for some exciting rugby – it will be Judgement Day and I’m sure the boys will be looking forward it.”

Tickets to ‘Judgement Day’ are available now at £10 for children and £25 for adults from all four regions and online at www.wru.co.uk/tickets. A family package (2 adults, 2 children) is also available priced at £50.

Meanwhile, Dragons fans can catch their team in action at Rodney Parade next against London Wasps (17 January) followed by the LV=Cup game against Ospreys (26 January).