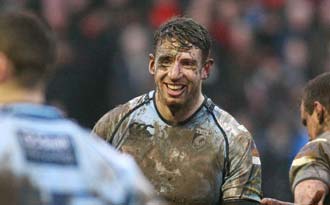 Following Cardiff Blues’ festive Boxing Day triumph over the Newport Gwent Dragons, Alex Cuthbert has set his sights on victory over the Ospreys when the two regions clash at the Millennium Stadium on March 30, 2013.

The Wales and Blues winger is set to come up against the RaboDirect PRO12 champions for the inaugural ‘Judgment Day’ event which features Dragons v Scarlets and Blues v Ospreys at the home of Welsh sport.

The Blues lost to the Scarlets but bounced back to beat the Dragons over the festive period but Cuthbert is determined to make it two successes from three Welsh derbies when they take on the Ospreys at the Millennium Stadium.

“A win on a derby day is extra special,” said 22-year-old Cuthbert. “Everyone loves bragging rights, including the fans, and it will be good to get a win over the Ospreys as I haven’t beaten them yet over the times I’ve played.”

The Welsh Rugby Union and four Welsh regions have joined up to bring Judgement Day to rugby supporters for the next four years. The event will see the home games of the two East Wales regions played at the Millennium Stadium against the two West Wales sides on rotation each season.

“I can’t wait for the first Judgment Day at the Millennium Stadium,” added the Wales winger. “It’s the first time for back-to-back regional derby games and for the fans to see the best of Welsh rugby from all four regions so obviously everyone is looking forward to it.

“I’ve experienced quite a few derbies but the Millennium Stadium offers that something extra special and the opportunity for the supporters from all four teams to be in the stadium at the same time. It’ll be awesome, it should hopefully be like an international, and I’m definitely looking forward to it.”

The Grand Slam Winning winger believes that the at the Millennium Stadium factor is just the tonic the Blues need to overthrow the Ospreys and hopes the fans will come out in their droves to support the new Welsh rugby initiative.

“Players play better with a better atmosphere and greater support. All teams will want to play some free running rugby especially in the stadium and put on a good show for the supporters that have come to watch. It will be really exciting to play against some of the Wales boys too. We’ll all be up for a good game and hopefully we can get a win for the Blues.

“The derby games are traditionally big games, both home and away, and the rivalry is built up all season. It will be great to get that derby factor on a bigger scale in the Millennium Stadium and pass on something that will be special for years to come.”

Cardiff Blues are in action in the Rabodirect PRO12 competition next on Friday 8 February against Leinster at Cardiff Arms Park. Tickets are available at www.cardiffblues.com