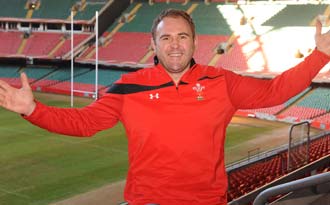 Former Wales captain Scott Quinnell will be asking Santa for a ‘clean slate’ this Christmas and for the defending Grand Slam champions to claim at least one of the big three southern scalps in 2013.

The British & Irish Lions, Wales and Llanelli star thinks that Wales have got what it takes to beat the likes of Australia, New Zealand and South Africa and to retain the Grand Slam title in the 2013 RBS 6 Nations.

The legendary No 8 has put his faith in Welsh rugby and claims with ‘optimism’ and ‘self-belief’ Wales will be back to winning ways when they face their European rivals in just over six weeks.

“Welsh rugby fans will be asking Santa for an injury clean slate this Christmas to enable us to look forward to the Six Nations because we are of course reigning champions! We need optimism and self-belief to get that Grand Slam feeling back and to start well against Ireland at the Millennium Stadium in February,” he said.

Quinnell was part of the Wales side who celebrated victory over South Africa for the inaugural Millennium Stadium event on 26 June, 1999, so he knows what it’s like and what it takes to topple one of the world’s top teams.

As well as the famous Springbok victory, Welsh fans will also remember beating the Wallabies in 2005 and 2008 at the home of Welsh sport and Quinnell believes there can be more of the same in 2013.

He believes that Wales’ players and fans alike should remind themselves of the various positives that come out of a disappointing Autumn Series.

“I believe the current Welsh team are good enough to have won the last two autumn fixtures and in fact the last three Tests against Australia,” he declared.

“It’s about self-belief, not getting down on ourselves, about believing in what we are and what we can do and then going out and showing that against Ireland when we meet them first up in February.

“The team played very well against Australia in the autumn and produced a superb second half performance against New Zealand.  We just can’t let the sides get a lead on us – we must show greater self-belief and improve on what we started to show against Australia.”

Quinnell is set to share his most memorable rugby experiences with the fans for the new WRU Rugby Legends Tours at the Millennium Stadium on 29 January, 2013.

The unique star-studded tour offers fans the chance to take a peek behind-the-scenes at the national rugby stadium and Quinnell will be with them every step of the way to relive the greatest memories of wearing the national jersey of Wales.

“I’m very fortunate to have played at the Millennium Stadium,” he said. “For me it’s the best stadium in the world and I’m looking forward to sharing my memories with everyone that wants to come and experience what it’s like to be player for the day on 29 January.”

The route includes the home changing room, the players’ tunnel and finishes up in the prestigious President’s Box for a Q&A session full of all the best rugby anecdotes.

Quinnell is one of eight rugby legends ranging from the golden era of the 70s to current Grand Slam champions booked for WRU Legends Tours.

The Rugby Legends Tours package, priced at £82 or £150 for two, is an excellent Christmas gift idea for rugby lovers and Quinnell is urging fans to get their tickets over the festive season.

“Get out there and buy this wonderful gift and let’s look forward to a great 6 Nations together,” he said. “I recommend any occasion where you get to set foot in the Millennium Stadium, the hair will stand up on back of your neck and on January 29 we’ll definitely have some fun along the way.”

To ensure the quality of WRU Rugby Legends’ Tours, spaces are limited and early booking is recommended.
Fans should act fast to snap up the ultimate gift idea and treat your favourite person to an evening with their favourite person this Christmas CLICK HERE TO BOOK