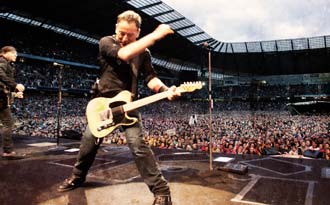 The ‘Boss’ is back

Rock legend Bruce Springsteen is coming back to the Millennium Stadium for the 2013 leg of the ‘Wrecking Ball’ World Tour on 23 July, 2013.

Due to phenomenal demand, The Boss and his E Streetband have today (TUESDAY) announced the addition of a Cardiff show and tickets will go on sale on Thursday 20 December, 9am.

The world tour – from his 17th studio album, Wrecking Ball, which debuted at#1 in the US and 15 other countries – is the second Highest-Earning Tour of 2012, attracting over 2 million fans since it kicked off in March.

To date, the ‘Wrecking Ball’ World Tour has stopped in 17 countries for over 80 shows including several of the longest performances of Springsteen’s career and earned universal acclaim being called “gigantic” (Rolling Stone), “the stuff of legend” (Irish Independent) and “the greatest live act in the world” (Evening Herald).

Springsteen first played to a packed out Millennium Stadium in the summer of 2008. Tickets for the 2013 gig will be available on general sale from Thursday 20 December at 9am.

“This is going to be an extraordinary night on one of the most ambitious tours of Springsteen’s career. He was awesome when he toured here in 2008 and it gives me great pleasure to confirm that he’s back for yet another fantastic live music performance in Cardiff in 2013.”