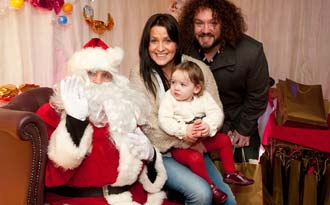 Wales’ rugby stars and their families have gone Christmas crackers for Santa Claus Tours at the Millennium Stadium this week.

The popular stadium tour with a unique Christmas twist has attracted a host of international rugby players and their families as Santa Claus and his reindeers come to town.

British & Irish Lions, Wales and Ospreys prop Adam Jones was among players past and present at the home of Welsh sport yesterday (Monday) as their families enjoyed mince pies and carol singing in the WRU International Players’ lounge.

For one time only, Jones shared the route from the changing room, down the tunnel and onto the hallowed pitch with his 18-month-old daughter Isla and wife Nicole, while seeking out the magical clues leading to Santa’s grotto full of Christmas gifts.

“Christmas is always a great time of year in the Jones’ household,” he said. “And we’re looking forward to it being extra special this year as our daughter Isla is now starting to appreciate the magic of Christmas.

“It was fantastic to share the Millennium Stadium tours with Isla today and see her face as she met with Santa in his grotto. I guess it will be another few years before she understands what the stadium represents for our family but my wife and I have got some great pictures!

Jones, who missed out on the recent Dove Men Series at the Millennium Stadium due to injury, added: “The stadium looks completely different at Christmas from just a few weeks ago when I was sitting in the television studio during the autumn internationals.

“I’ve asked Santa to make sure I’m fit to be back here when the RBS 6 Nations come round and, in the meantime, I’ll be recommending Santa Claus Tours to everyone that enjoys celebrating Christmas with their children.”

Offering something for all the family, the magical Christmas tour takes in all the rugby highlights on the route to the Santa’s grotto where the elves will re-stock Santa Claus’ sleigh full of presents on Christmas Eve.

Many more Welsh greats are expected to join in the festive fun at the stadium’s winter wonderland which holds tours every day until Christmas Eve at the home of the Welsh national rugby team.

The tours are free for children under two years old, £8.50 for under 12s and £5.50 for adults, with concessions and group discounts available. All Tours include a gift for the children.

A selection of spaces for sessions until 24 December can be booked up at millenniumstadium.com. Groups of 30 or more should contact the Tours Administrator by telephone: 0292082 2308