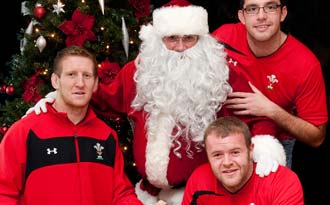 Santa Claus is coming to town

Wales’ rugby stars got an early Christmas treat when Santa dropped in to spread the news that Santa Claus’ Tours are returning to the Millennium Stadium.

Bradley Davies, Lou Reed and Scott Andrews enjoyed a special meeting with Santa as he arrived in Cardiff early to set up his Welsh headquarters deep in the heart of the iconic rugby stadium.

The Wales and Cardiff Blues forwards shared their Christmas wish lists as Santa explained that Santa Claus’ Tours are coming to town on Tuesday, 4 December, offering a unique seasonal twist to the popular Millennium Stadium Tour.

The international rugby trio were excited to learn that Mr Claus is soon to take over the home changing room, the players’ tunnel and the hallowed pitch that has recently hosted the Autumn Rugby Series at the home of Welsh sport.

“Santa is so busy at this time of year and we were all delighted to get to meet him before the Santa Claus’ Tours kick off at Millennium Stadium,” said Reed. “I’ve heard that lots of our Wales team-mates and their families have met with Santa over the last couple of years and I can’t wait to get my ticket to join in this year!”

Andrews added: “Christmas is such a special time of year and after a tough few weeks of international rugby I’m really looking forward to spending time with the family. Santa has promised that his tours are really magical and as I’ve been a good boy all year, I’m especially looking forward to the gift at the end.”

Wales lock Davies asked Santa to help him get well soon after he was injured when Wales played New Zealand. “Above anything I want to be fit for Christmas,” he said. “But if my rehab schedule allows, I’ll definitely be back to see Santa at the Millennium Stadium in December.”

Offering something for all the family, the magical Christmas tour takes in all the rugby highlights on the route to the fantastical surroundings of Santa’s grotto where the elves will re-stock Santa Claus’ sleigh full of presents on Christmas Eve.

And for the little ones, Santa’s helpers will lead the quest to find the puzzle pieces which make up the special password to Santa’s secret hideaway in Wales’ national stadium.

Santa Claus’ Tours includes a Christmas gift for all good girls and boys and Christmas lovers can book now to visit between December 4 and 24 at www.millenniumstadium.com (now https://www.principalitystadium.wales/)

The tours are free for children under two years old, £8.50 for under 12s and £5.50 for adults, with concessions and group discounts available.