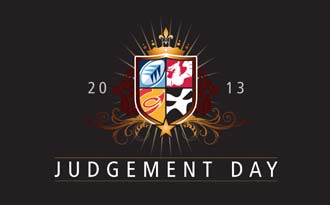 The Welsh Rugby Union launched the event’s title exclusively to fans at the Wales versus Samoa game last night to set the scene for the ultimate battle of honour in Welsh rugby.

A series of new Judgement Day adverts were revealed to the Millennium Stadium crowd to showcase the unique look-and-feel of the double derby occasion which draws on heraldic battle tradition.

The ads unveiled a specially-designed coat of arms symbol to represent the coming together of the Wales’ contending regions; Newport Gwent Dragons versus Scarlets and Cardiff Blues versus Ospreys.

“It’s Judgement Day. It is the coming together of four regions,” said Jones, who last night led Wales for a record 29th time.

“It’s going to be a wonderful rugby day for rugby fans and what better place to be part of what hopefully will become part of a wonderful tradition. It’s certainly something as players we’re all looking forward to.

“There are some guys who don’t get the opportunity to play at the Millennium Stadium other than at Club level and it’s going to be an excellent experience for the guys that have played here to share that with them.

“It will be great to share the walk down the corridor and the walk down the tunnel with them and to see the look in their eyes when they stand on the field and look up and around and take in that whole atmosphere.

“I’m from an era when derby days were incredibly special and this is a way of really reigniting that. These are experiences that fans and players alike will talk about for years to come. There’s bragging rights too, something that for the next 12  months the fans get to talk about and tease their mates in work that you beat them at the Millennium Stadium, until it comes round again.”

As the title suggests, Jones, who has also captained his region, is looking forward to igniting the passion and competitive spirit in Wales to kick-off the back-to-back RaboDirect PRO12 games which will be played as part of a four-year deal with the regions.

He added: “We all live along a pretty small stretch of land and we’re all fighting for bragging rights and fans can expect a real combative, competitive arena. It’s in the biggest stadium in Wales, hopefully the biggest rugby crowd of passionate rugby fans, and we get to go head to head and really see who comes out on top.”

The inaugural Judgement Day event falls on March 30, one week after the final clash of the 2013 RBS 6 Nations Championship. He said:

“What a wonderful way to keep the momentum going and hopefully come back off a good 6 Nations when the rugby’s buzzing and the supporters have really got an appetite for it and they get the opportunity to come back and support their Clubs as well,” he said.

The event will see the home games of the two East Wales regions played at the Millennium Stadium against the two West Wales sides on rotation each season.