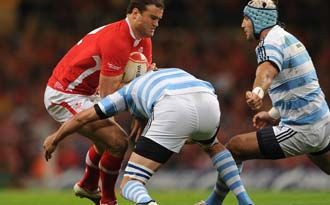 Tickets for Wales’ opening Dove Men Series game against Argentina will be on sale right up until kick off at 2.30pm tomorrow across all city-centre outlets.

Fans can get their tickets to the match from the new WRU Ticket Store in St David’s Dewi Sant shopping complex as well as the Ticketline shop on Westgate Street and official WRU outlets at the Hayes and Cardiff Blues Ticket Shop.

The popular WRU Ticket Store will be open from 9.30am and all other official retail outlets will be assessable from 9am for rugby supporters heading to the city-centre early to avoid the queues.

Tickets will be available at £10 for Under 16s and from £30 for adults (while stocks last) and with more official outlets than ever before operating same-day sales, WRU Head of Sales and Marketing Craig Maxwell is expecting a great walk-up ahead of the game. He said:

“Welsh rugby fans like to arrive in Cardiff early to soak up the matchday atmosphere and so we’ll be opening up our new WRU Ticket Store at 9.30am tomorrow for those without tickets to guarantee their place at the game.

“And with more official ticketing outlets operating same-day sales than ever before, our customers can be sure to avoid those collecting pre-paid tickets and get their tickets early with plenty of time left to enjoy the carnival atmosphere in Cardiff ahead of the game.”

As well as the four official ticketing outlets for same-day sales, the WRU’s pre-paid ticket collection point will open at 9am in the WRU Shop on No 8 Westgate Street, next to Millennium Stadium’s Gate 3 entrance.

Fans also get their tickets today to watch Wales face the mighty Pumas from the WRU Ticket Store until 8pm, at wru.co.uk and or by phone 02920 230 130