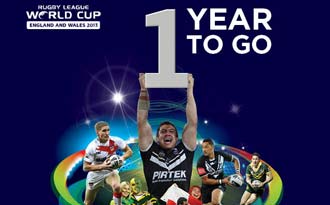 Tickets for the Rugby League World Cup 2013 are on public sale from today, as organisers celebrate ‘one year to go’ until the start of the tournament at Cardiff’s Millennium Stadium.

RLWC2013 will kick off in Wales’ capital city on Saturday 26 October when host nations Wales and England take on Italy and Australia respectively and as of 12noon today fans can get their tickets to be part of the action one year from now.

Fourteen of the world’s greatest rugby league nations will compete for the title of World Cup 2013 Champions and players have gathered this morning from across the globe to launch the sale of tickets and celebrate the landmark occasion at a special media event in MediaCityUK.

RLWC2013 General Manager, Sally Bolton said: “We wanted a special event to mark this very significant milestone for the tournament. The one year to go date was too good an opportunity to miss and gave us a great way to launch our tickets going on general sale.

“Early ticket sales to the fans of the Rugby League clubs and those who pre-registered have been overwhelming. We’ve found that there is huge interest in the big games of the tournament, the opening double header at Cardiff and the semi-finals at Wembley in particular.

“Sales for the Rugby League World Cup Final at Old Trafford however have really exceeded our expectations, currently out-stripping the other venues by five to one. I’d urge anyone therefore to buy tickets for the final now to avoid missing out.

“We think that offering 55% of our tickets at £20 or less to see the best players in the world represents fantastic value. This is the pinnacle of Rugby League, a global sport which delivers extraordinary speed, power and athleticism to the spectator.

“To gather players from all of the nations who will ultimately be responsible for making RLWC2013 the best Rugby League World Cup ever was a great way for us to kick off ticket sales”.

Tickets starting at just £10 (£5 concessions) for group games and quarter-finals are available for purchase for all games and via various special packages at www.rlwc2013.com.