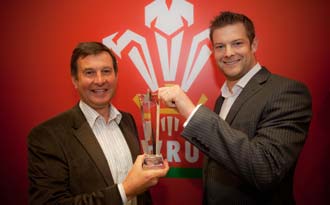 The Millennium Stadium has been honoured for its contribution to live music at the exclusive Live Music Business Awards in association with Live UK, the magazine dedicated to the music business.

Cardiff’s multi-event venue, which is owned and operated by the Welsh Rugby Union, scooped the Best Venue Teamwork Stadium prize at a glittering awards ceremony in London this week.

The Millennium Stadium triumphed over London’s Emirates Stadium and City Of Manchester Stadium (Etihad Stadium)after being shortlisted in the Final Top 3 voted for by LIVE UK magazine readers – signalling that Wales’ top music venue continues to impress concert-goers heading for the capital city.

The stadium’s Venue Sales Manager Alex Luff collected the award at a special presentation ceremony at the Radisson Blu Portman Hotel in London. He said: “The Best Venue Teamwork award is a fantastic achievement at such a prestigious industry event and is testament to the experienced and professional staff we have working behind the scenes at the Millennium Stadium.

“The award confirms the stadium’s excellent reputation as a must-play venue within the live music industry and it is fantastic that we have achieved this recognition for the ‘can-do’ attitude of our staff.”

At the Millennium Stadium, preparations are underway for the Dove Men Series which kicks-off with Wales playing Argentina on Saturday, 10 November.

WRU Group Chief Executive Roger Lewis said: “The Millennium Stadium’s city-centre location, fully-retractable roof and removable pitch system allows us to constantly attract the biggest and best events to Cardiff  and I am extremely proud that the versatility of the venue has received the recognition of both fans and industry leaders at the Live Music Business Awards.

“With four games of world-class rugby up next at the Millennium Stadium, the award is a fantastic boost for the stadium operations team after a busy summer of 11 Olympic football matches and the annual Speedway Grand Prix.”
Caption: Roger Lewis (L) and Alex Luff (R) celebrate the music industry honour.

Details of all award winners will be published shortly at www.livemusicawards.co.uk

Tickets for upcoming events at Millennium Stadium can be accessed via www.wru.wales and https://www.principalitystadium.wales/