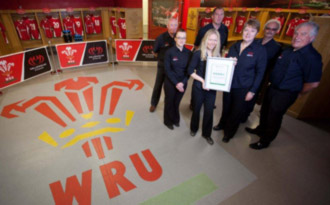 Millennium Stadium Tour Guides are celebrating a personal best this summer at the venue which brought Olympic football and Grand Slam winning rugby to Cardiff.

The stadium experts have welcomed the greatest ever number of visitors for their official guided tour – while positive travellers’ reviews have earned an award for tourism excellence from the world’s largest travel website.

A record 59,600 visitors have opted for the exclusive behind-the-scenes tour at the home of Welsh sport when visiting the city centre, a 33 per cent increase on the previous year.

And with many tourists now rating their experiences online, the Millennium Stadium has received the TripAdvisor 2012 Certificate of Excellence which recognises consistently excellent traveller reviews on the popular tourism site.

“We are extremely proud of our reputation as a multi-event venue as well as the heritage and tradition of Welsh rugby on which the foundations of our Stadium are built,” said Millennium Stadium Manager Gerry Toms.

“The versatility of the Stadium appeals to visitors from all over the world – not just the core rugby fans but motorsports, football and music lovers alike – and we’re thrilled that our tours are attracting more satisfied customers than ever before.”

The tours operate all year round and, available in English, French and Welsh, continue to attract visitors from all over the globe – with French groups responsible for near 20 per cent of the footfall.

As the Tours have attracted thousands of extra visitors through the doors in the 12-month period since June last year, an additional 600,000 plus spectators have attended major events in the same period.

Wales’ Grand Slam Winning RBS 6 Nations Championship played out at the venue which also scooped the Rugby Venue of the Year award during the 2011/2012 season.

Additionally, during Wales’ exciting 2011 Rugby World Cup campaign, the stadium attracted crowds greater than those in the RWC host nation, some 62,000 fans, when it opened up its doors for the free live television screening of Wales’ Bronze Medal game.

Millennium Stadium Tours start at the WRU Store, No.8 Westgate St. (situated between Gates 3 & 4) and are available on the hour Monday to Saturday between 10am and 5pm and on Sundays and Bank Holidays between 10am and 4pm.