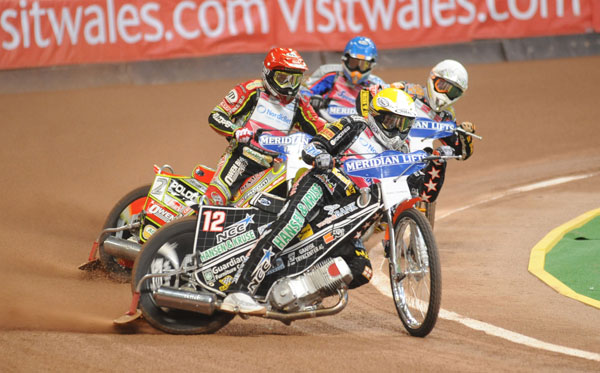 Tickets are now on sale for the 2013 British FIM Speedway Grand Prix on June 1 at the Millennium Stadium. Fans who book their seats before October 8 can save up to 15 percent* on tickets and can also take advantage of discounted accommodation.

The event switches back to its more traditional slot after it was switched to August this year due to the London 2012 Olympic football matches taking place in the Welsh capital.

Following the success of Saturday’s event, BSI Speedway managing director Paul Bellamy is confident the 13th staging of world speedway’s biggest meeting will be another night not to be missed.

He said: “The British FIM Speedway Grand Prix is one of the biggest motorsports events of the year. Once again, we had some thrilling racing on Saturday and the fact we attract so many fans to Cardiff shows what a great night it is.

“We understand times are hard at the moment, so we’re offering a 15 percent discount, with tickets starting at £29 and family ticket priced at £85 where one child goes free.

“We have also been working with the Millennium Stadium, Cardiff Hoteliers’ Association and Cardiff & Co to secure accommodation for fans going to the 2013 event at competitive rates.

“As a result, 1,000 bed spaces are available once again for true speedway fans. Further details can be obtained on the confirmation customers will receive from See tickets when they book their tickets.

“There is nothing in the sport which compares to the spectacle at the Millennium Stadium and work has already started on making next year’s FIM British SGP even bigger and better.