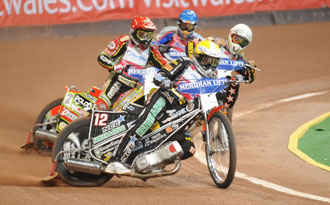 Thousands of fans will flock to Cardiff this weekend for the fast and furious 2012 FIM Fogo British Speedway Grand Prix at the Millennium Stadium.

The annual motorsporting event comes to the city-centre for the twelfth consecutive Championship on Saturday August 25 and is considered right up there with the biggest events on the British motorsport calendar.

The 15 best riders in the world, including no less than four world champions and British star Chris Harris, will go full throttle in front of over 40,000 thousand fans.

The fun will start in the Fanzone on St Mary Street which is open throughout the day (11am – 4.30pm)  – jam packed with activities to keep all the family entertained.

Monster Energy will be entertaining the crowds where there will be a chance to sample some of their world famous energy drinks, meet the Monster Girls and more alongside some of the coolest DJ music around. Monster Energy has been bringing their style of entertainment to some of the most exciting motorsport events around the world so this is one not to miss.

Always a popular draw, some of speedway’s top riders will be taking part in autograph sessions, allowing fans to get up close and personal with their sporting heroes.

Popular rock and pop band, The Magoos, will get the party truly started in the Fanzone in the build-up to the main event.
The Grand Prix itself will start with pre-event entertainment from 4.30pm in the Stadium.

Funky street dance group and ‘Britain’s Got Talent’ sensation, Flawless – described by Simon Cowell as one of the best acts he’s seen – will top the bill. The dance group – who have recently starred in the number one smash hit movie StreetDance 3D – are set to wow the crowd with a spectacular street dance performance, sure to gear everyone up before the big event.

A rousing performance from CF1 – one of Wales’ most successful choirs – as well as top UK brass band, B.T.M will also entertain the pre-event masses in the stadium.

The FIM Fogo British Speedway Grand Prix kicks off at 6pm and will be full of drama and guaranteed thrills, as riders reach speeds of up to 70mph – competing on 500cc bikes, with no brakes and acceleration that’s faster than an F1 car!

This year’s event promises to be part of one of the most competitive GP seasons ever – with current World Champion Greg Hancock, and previous title winners Jason Crump, Nicki Pedersen and Tomasz Gollob, among those battling for vital points to lift the title.

Legendary British speedway world Champion Freddie Williams – known as the flying Welshman and one of the sport’s  all-time great riders – will make a return to Wales to present the winner’s trophy, which will be followed by a spectacular indoor fireworks finale  – a suitably explosive finish to what is sure to have been a sparkling display on the track!

Make sure you’re part of the action by booking your tickets now.  They can be purchased online via www.speedwaygp.com   ticketmaster.co.uk  or by calling 0844 248 5029. Tickets will also be availble to purchase from the Stadium on event day.