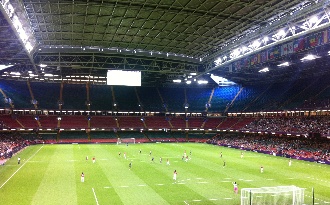 The Millennium Stadium will host the first ever Olympic football event under a closed roof when it closes its fully-retractable roof for the Women’s Olympic football match between Japan and South Africa this afternoon.

With rain forecast as the match kicks off in the Welsh capital at 2.30pm, London 2012 organisers have decided to close the roof for this afternoon's fixture.

This is great news for fans travelling to Cardiff to be part of Olympic action in Wales as they follow the advice of organisers and get in early to take their seats for the game – avoiding the rain.

Locog spokesperson Simon Rimmer said: “We are making history at the Millennium Stadium today with the first football match in Olympic history to be played under a closed roof. Japan will take on South Africa in match 13 of the women’s competition this afternoon in a game guaranteed to be played in dry conditions.

"The decision was taken to close the roof before each team made their ‘familiarisation’ visit to the Cardiff city centre stadium yesterday (Monday) afternoon due to the inclement weather conditions forecast. The decision has been made in the best interests of all parties from the teams to the spectators in Cardiff and at home. Put simply, if it’s raining and you have a roof – all other things being equal – it makes sense to shut it.”

The iconic Cardiff venue which has staged a host of major football events such as FA Cup Final, Carling Cup Final and the Community Shield has appealed to fans and event promoters all over the world with its fully-retractable roof, removable pitch system and city centre location.

The eyes of the sporting world are firmly fixed on Cardiff for all bar two days of the Games since the Stadium kicked off the Olympic Games in Cardiff last week with GB Women's team versus New Zealand. The tournament will continue until 10 August with highlights of the men's tournament still to come – the quarter-final on 4 August and the Bronze Medal match on 10 August.