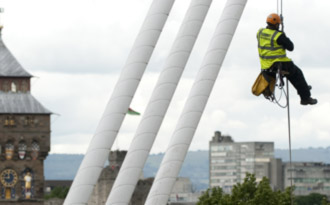 Workers at the Millennium Stadium are reaching new heights to prepare the venue for the first event of the 2012 Olympic Games on July 25.

A trio of abseiling rope-climbers from Summit Rope Access have topped the 90m iconic masts to ensure that Cardiff’s skyline is looking its very best for the occasion.

With just over two weeks to go until London 2012 kicks-off in the capital city, the climbers will get through 120 litres of paint to replenish the exterior of Wales’ premier event venue.

The eyes of the world will be on Wales when the stadium hosts 11 Olympic football matches during the summer Games and staff throughout the venue are busy with the final preparations.

Millennium Stadium General Manager Gerry Toms said: “We are extremely proud to be opening the London 2012 Olympics here in Cardiff on July 25 and our staff are busy behind the scenes to make sure the Stadium is in great shape when the GB women’s team face New Zealand for the first of 11 exciting Olympic football fixtures.

“Each summer we carry out routine maintenance to the stadium’s four giant masts and with the help of our abseiling painters we are confident that the stadium will be looking its very best when the eyes of the world are fixed on Wales later this month.”

Cardiff’s iconic city-centre venue will host both the women’s and men’s GB teams between 25 July and 10 August. In the men’s tournament, fans can also watch Brazil play Egypt in Cardiff on July 26 and the Bronze Medal Final on August 10.

All London 2012 tickets are accessed via www.tickets.london2012.com and prices start at £20 for adults, with special prices available for people under 16 and over 60 at many matches.

Hospitality packages are available on the Stadium’s official website: https://www.principalitystadium.wales/