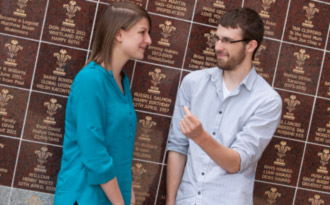 Love is in the air

Life-long rugby fan Mark Roberts wanted his marriage proposal to long-time girlfriend Abbie Cockerill to be carved in stone and he made that wish come true recently.

Roberts purchased a Millennium Stadium ‘Legend’s Walk’ Paver, a  piece of personalised granite, and engraved it with the words ‘Marry Me Abbie, Love Mark’. The paver has been laid amongst other pavers within a wall inside the grounds of the Millennium Stadium and there were tears all round when he took Abbie to the spot earlier this month. Abbie, who is also now an avid rugby fan did not disappoint with her answer.

Twenty-one year old Roberts said, “I had been thinking about how and where to propose to Abbie, and when I saw this on the WRU website I thought it would be a good idea with us being such regular visitors to the stadium for international rugby matches.

"We are also Cardiff Blues ticket holders so it seemed perfect. I purchased the paver over a year ago, along with the ring, so I waited patiently for the right moment. I had planned to propose on the day of the Wales v Barbarians match, but our tickets didn’t give us access to the right area on matchday so I had to keep the ring safe for another day.

"We have tickets for Wales v Australia in the autumn, but I’m sure we’ll be coming past more often now, just to check out our own piece of history.”

The couple hail from Haverfordwest in Pembrokeshire but are both currently studying at Cardiff University.

On the day of the proposal, the heavens had opened and Roberts found himself on one knee in a puddle. “She kept me down there for a while before giving me an answer but I was fairly confident I wouldn’t be disappointed.”

Abbie added, “I knew Mark had bought a brick but he told me it said Happy Birthday and I believed him. When we got there, he told me to close my eyes and when I opened them he was on one knee and proposed. That’s when I read the engraving. It was really romantic. I’m really happy but I still can’t believe it all.

The couple returned to the spot at the stadium this week with members of their families. Mark’s dad Hugh said, “Although Mark had said nothing of his planned proposal, when he rang me that afternoon I had an incline he may have done something like that."

His mum Sylvia added, “I knew Mark would pop the question at some point. They have been together since Mark was 16 and Abbie 15, childhood sweethearts.”

Abbie’s mum Helen said, “We are all thrilled. They’ve been together four and a half years and we always joked it would happen one day. Mark’s a great lad and he treats Abbie so well, she’s already part of his family.”

WRU Head of Communications John Williams said, “We see so many large scale events here at the Millennium Stadium, but we can sometimes forget what this building means to so many people. It’s fantastic that Mark chose this venue for his proposal to Abbie and the fact that his words are now carved in stone makes it all the more special.”