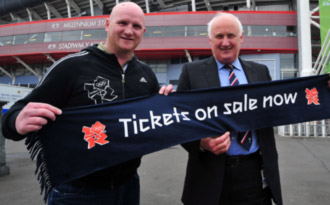 John puts his Hart behind Olympics

Former Wales striker John Hartson has urged sports fans all over Wales to get involved when the world’s greatest footballers head to Cardiff for London 2012 Olympic football matches at the Millennium Stadium.

The iconic sporting venue will host 11 football matches this summer, including the first event of the Olympic Games when Team GB take on New Zealand in the women’s tournament.

With tickets on public sale until Sunday, 6 May, former Wales captain Hartson is calling on the people of Wales to secure their place to watch the world’s greatest international football stars at the home of Welsh sport.

“’There are some fantastic games lined up for the Millennium Stadium and the people of Wales are in for a treat,” he said. “From Team GB men and women to Brazil men and Japan women, some of the world’s best players will be showcasing their talent in Cardiff. I’d urge everyone to try and get tickets before the window closes on 6 May.”

So far approximately one million tickets have been sold for football with approximately 1.5 million still to sell at venues across the UK and Millennium Stadium’s Gerry Toms commented that this is a once-in-a-life opportunity for fans in Wales.

“This is a unique opportunity for sports fans all over Wales to be part the Olympic Games and show their support for Team GB as they face exciting opposition for one of the world’s greatest sporting events,” said the Stadium Manager at the venue which has also hosted major sporting occasions such as the FA Cup final, Rugby World Cup, FIM British Speedway and the Ryder Cup’s celebration concert.

“The Millennium Stadium puts Wales on the map as a must-visit destination and following an exciting tournament draw last week, some of the world’s major footballing nations have already started to descend on Wales’ capital city as they make their final preparations ahead of the 2012 Games.”

Stuart Pearce’s Team GB men were placed in Group A along with Uruguay which they will face at the Millennium Stadium on Wednesday 1 August, Senegal and UAE.