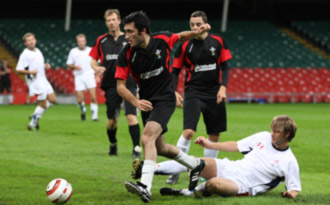 Olympics countdown is on

The Millennium Stadium is just 100 days away from hosting the first event of the 2012 Olympic Games when the London 2012 Football Tournament kicks-off at the iconic sports venue this summer.

The greatest multi-sports show on earth will open in Cardiff on July 25 at 4.00pm with a Team GB women’s football match, two days before the official opening ceremony in London.

Both the Team GB men’s and women’s Olympic football teams will feature at the iconic venue, which has secured 11 games across both tournaments between July 25 and August 10.

The stadium will also play host to some of the world’s greatest football players with the prestigious men’s Quarter-Final and the Bronze Medal matches confirmed for Cardiff.

As the countdown to the Games continues, footballing nations all over the world are now just over one week away from the official draw for both men’s and women’s competitions on Tuesday 24 April.

Millennium Stadium General Manager Gerry Toms said: “The official competition draw on Tuesday 24 April is a massive day for football fans and for everyone in Wales as the official organisers announce the world-class teams we can expect in Cardiff this summer.”

With 100 days to go until the eyes of the world are fixed on the Millennium Stadium, Mr Toms hopes that the people of Wales, not just the football fans, will show their support.

He said: “The London 2012 football tournament in Cardiff is a huge coup for Wales and for many sports fans it’s a once-in-a-lifetime opportunity to be part of the Olympic Games.

“With 11 games taking place in our 74,500 capacity stadium there’s plenty of chances to get involved and I hope that the Welsh fans come in their droves to be part of the exciting London 2012 action in their capital city this summer.”