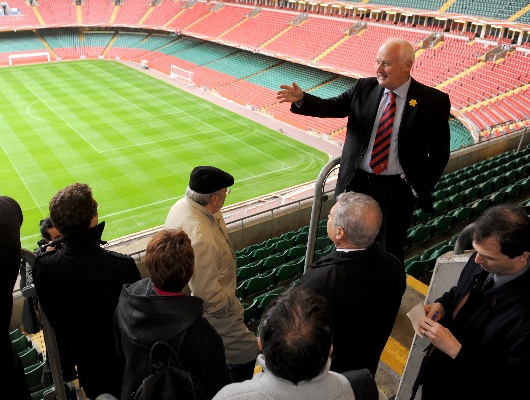 Millennium Stadium bosses shared their knowledge and experience with a French delegation bidding to host a new stadium in the shadow of Paris Orly Airport today.

The stadium’s role in the city’s heightened profile and economic performance was recognised by the visiting group who were interested in taking best practice and experience back to France.

The French delegation, from the Thiais Orly region on the southern edge of the centre of Paris, are putting together their bid to host the new stadium for the French Rugby Federation (FFR).

The FFR wants a multi-purpose 82,000-seat stadium as the home of  French rugby. The Thiais Orly group is offering a development that would include shops, bars, business park and an urban park.

The new stadium’s location would then mirror that of Cardiff’s Millennium Stadium, which sits right at the heart of the capital of Wales.

Gerry Toms, general manager of the Millennium Stadium, said: “We were able to share with our French colleagues some of the ways in which we have been able to attract a wide range of events. Our rugby is assured but for the stadium to be successful we have to be able to stage concerts, exhibitions, and a whole raft of events that might not normally be associated with a large stadium.

“Our guests were also interested in how the stadium blends with the life of the city centre and co-operates with the public bodies in the region  – we were able to share some of our experiences there. Possibly the single most important factor in the success of the Millennium Stadium has been the teamwork involved. We work closely with the Welsh Government, Cardiff Council, the police, Cardiff & Co and the transport operators. We made it clear that partnership has been key to the success of the stadium and that of the city.”

The visit was coordinated by Cardiff & Co and Roger Pride, managing director, said: “We were able to make this visit possible by using the sort of teamwork that Gerry Toms was so keen to emphasise. The team working to promote Cardiff is very focussed and the French visitors were impressed by that.”

Richard Dell’Agnola, the mayor of Thiais, said Cardiff had become famous for the success of its stadium and the way it had integrated with the city and contributed to the overall success of Cardiff.

He said: “We are determined to offer the FFR the best possible location for the stadium and for it be as successful as the Millennium Stadium – which is recognised as the best stadium in northern Europe. We are grateful to Gerry Toms and his team for sharing their experiences with us. They are, after all, going to be our competitors when we have completed our stadium in 2017.”