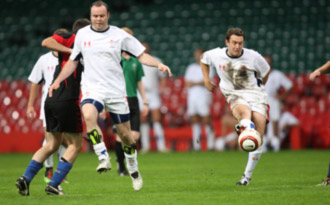 Football fans will be given the chance to play at Wales’ Olympic football stadium this month, as part of Millennium Stadium Community Events project.

Four charity football matches will be held at Cardiff’s Millennium Stadium throughout the month of April, as the venue opens its doors to help support local community and charitable organisations in Wales.

The events will give locals a chance to test out the facilities before the 2012 Games come to the home of Welsh sport, which will host eleven Olympic football games including the first Olympic event of London 2012 on July 25th.

As the countdown continues at the Cardiff venue, the Community Events will help to raise funds for a range of charities, including Ty Hafan and Noah’s Ark Appeal.

“Competing on an Olympic football pitch is a one-in-a-lifetime experience and I’m delighted to extend the opportunity to local community organisations that have dedicated a lot of time and effort to raising significant funds for charitable causes,” said Stadium Manager Gerry Toms.

“There is a huge buzz around the Olympics as we get closer to that very first event of London 2012 at the Millennium Stadium on July 25th and the opportunity to play on an Olympic pitch will be an inspiration to all those taking part in the charity football matches.”

The stadium’s Community Events initiative invites not-for-profit organisations in Wales to bring their events to the world-class sporting arena, free of the hire costs associated with major commercial events.

Already this year the project has played host to an educational film club and two community rugby matches. Further information is available at the website millenniumstadium.com