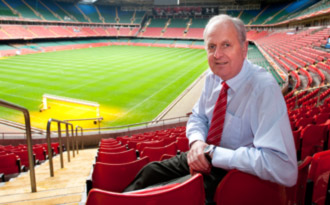 The Millennium Stadium has been recognised by leading industry professionals from across the world ahead of the prestigious TheStadiumBusiness Awards, in association with KPMG.

The stadium’s event manager, Ian Peploe, has been shortlisted in the Safety and Security category for the international event which values a whole spectrum of achievements from across the global stadium industry.

With over six years’ experience managing rugby union events staged at the home of Welsh sport, Peploe, from Bridgend, is acknowledged as a key individual behind-the-scenes at the city-centre venue.

The Rugby Event Manager, and former Head of the National Assembly for Wales Police Unit in Cardiff Bay, will represent the stadium’s commitment to safety and security at TheStadiumBusiness awardseveningat the Museo dell’Automobile in Turin, Italy next month (15 May).

“I am delighted to represent the Millennium Stadium for this prestigious award which puts Wales on the map as a leading destination in the events industry,” said the stadium’s event manager.

“The awards have attracted the interest of event professionals across the world and it is an honour to be named with some of the biggest names in international event management.”

Safety and security are high on the event management agenda when a capacity crowd of 74,500 flocks to the Millennium Stadium for international sporting events. Stadium Manager Gerry Toms added: “The safety and security of spectators visiting the Millennium Stadium has always been a priority for us all yet much of the work that provides a safe and secure environment for visitors goes on behind-the-scenes. This nomination recognises the work of Ian, the stadium security team and event day stewards.”

Thousands of nominations were whittled down to create the shortlist, which will be judged by an independent panel of industry figures including Pat Coyle, President, Coyle Media Inc, USA, Michael Bolingbroke, COO, Manchester United FC and Thierry Favre, Head of National Associations Development, UEFA.

Founder of TheStadiumBusiness Summit, Ian Nuttall, commented: “Every year we’re impressed by the incredible level of innovation and professionalism we witness during the nomination process and this year was no exception. Nominees should be very proud of their achievements and we congratulate them all in reaching the shortlist.”