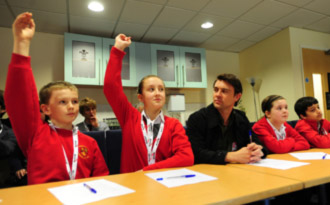 Pupils from 15 schools across Wales enjoyed a free screening of ‘Fantastic Mr Fox’, followed by workshops in film, and review writing in English and Welsh – culminating in a ceremony with awards presented by Leighton Andrews, Owen Sheers and Marc Evans for the best contributions to the workshops,

Supported by the Film Agency for Wales, FILMCLUB was launched in Wales just nine months ago. ‘Mission Possible’ highlights the educational and social impact that exposure to a curated catalogue of films is already having on Welsh youngsters – including many in disadvantaged or rural areas for whom access to cinema may be limited.

Two hundred and fifty schools have so far signed up to the free scheme, almost 5000 reviews have been uploaded to the website by Welsh members and feedback from participating schools is overwhelmingly positive:

“I signed up to FILMCLUB as I saw it as an invaluable opportunity to provide an engaging and enriching activity for our pupils.  We have had a large and positive response from pupils in years 7, 8 and 9 and I would like to introduce a club for older pupils too.  Two members have already been selected as ‘reviewer of the week’, one now writes a weekly review for the local newspaper and another has been selected as a FILMCLUB Young Reporter.  A couple of members who are very reluctant writers have willingly worked on reviews for the FILMCLUB website and the scheme is engaging pupils who aren’t involved in any other extra-curricular activities.”  Gareth Jones, Greenhill School, Tenby

“Children who wouldn’t normally participate in an after school club find it enjoyable and as an outcome are becoming more engaged generally in school.  The children’s ability to write quality reviews is certainly improving and is already having an impact on their general standard of writing.  The website is of a high quality and easily useable by staff and children.   The relaxed atmosphere of FILMCLUB is having a positive impact on standards of behavior.” Janet Hayward, Cadoxton Primary School

“FILMCLUB encourages young people to engage with thoughts and concepts that are vital for understanding the world around us. In addition to developing literacy, writing and communication skills, FILMCLUB also harnesses the imagination and potential of those who take part. That’s why the Welsh Government continues to support this unique and inspiring project.” Leighton Andrews, Education Minister

FILMCLUB’s latest official champions, Owen Sheers and Marc Evans, have also welcomed the initiative: “Watching a diverse selection of films at FILMCLUB broadens a child’s horizons, introducing them to new ideas, cultures and creative influences. Following the film with a written review is a fantastic way to deepen and enhance this experience. When we write we think, and in having to shape a written response to the film the children will be encouraged to develop their own critical abilities, making the film experience as a whole increasingly active rather than passive.” Owen Sheers, Writer

Suzanne Alizart, Interim Chief Executive of the Film Agency for Wales says that support for FILMCLUB is as a result of the Agency’s commitment to developing audiences through formal and informal education, stimulating an appetite for specialized, cultural and non-mainstream films.

“The Film Agency’s facilitation and financial support of the FILMCLUB initiative, with specific learning materials and discussion, tailored to the devolved education scenario in Wales, is a cornerstone of our intention to embed film as a cultural experience from an early age, engaging minds, enriching lives and developing communication skills. Indeed, children today learn through pictures as well as words. Here is an opportunity for everybody, not just the stars, to learn and have fun through the medium of film.”  Suzanne Alizart, Film Agency for Wales

“It is great to see school children from across Wales sharing a day of fun and learning at the Millennium Stadium. For many of these kids, it is their first visit to the home of Welsh sport and FILMCLUB has made a huge effort, together with our dedicated events staff, to make this event something really special everyone involved. FILMCLUB provides an excellent example of how community and charitable organisations in Wales can benefit from the Millennium Stadium Community Events initiative, which hosts 15 community groups each year without passing on the hire fee borne by commercial organisations.” Millennium Stadium General Manager Gerry Toms

Any not-for-profit community organisation in Wales can apply hold their 2013 event at the Millennium Stadium via the website: www.millenniumstadium.com/communityevents