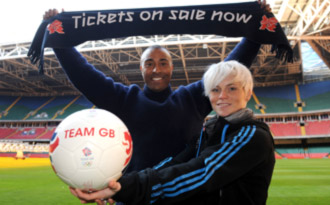 Senior officials of the London Organising Committee of the Olympic Games (LOCOG) and the International Olympic Committee (IOC) visited the Millennium Stadium today, as the venue prepares to host eleven Olympic football matches during the 2012 Games.

LOCOG Head of Sport Competition David Luckes arrived in Cardiff with a delegation from the IOC for a final tour of the venue before London 2012 kicks off in Cardiff with the first event on 25, July.

Both the men’s and women’s GB football teams are set to play at the home of Welsh sport which is also the confirmed venue for the prestigious men’s quarter-final and Bronze Medal.

The Millennium Stadium was described as ‘very impressive’ by David Luckes as the London 2012 visitors – including former Olympic hurdler Colin Jackson and Welsh international football player Jessica Fishlock – completed their tour of the world-class facilities.

“This venue is very impressive. It is a stadium that regularly hosts major stadium events and we know their track record. We have been impressed by the attention to detail and the staff,” said Mr Luckes. “The Olympics starts here on 4pm on July 25 and I think it will get the Games off to a cracking start.”

Former Olympic silver medalist Colin Jackson is also looking forward to the Olympic football in Cardiff: “I am so excited about the Olympics coming to Wales. I just can’t believe that my home city of Cardiff will be hosting an Olympic event,” he said.

“People often ask what the Olympics atmosphere is like but now they will have the chance to experience it for themselves. This is a once in a lifetime chance and people should not miss out. I am not going into the Village until July 27 so will be heading down to Cardiff to watch the opening event.”

Roger Lewis, Group Chief Executive of the WRU, which owns and operates the Millennium Stadium, commented: “The eyes of the world will be on the Millennium Stadium when the Games kick off in Cardiff two days ahead of the official opening ceremony and we are proud and delighted to be such an important part of this great sporting occasion.

“The stadium has a fantastic record for hosting world-class events, including some six years of first-rate football during the construction of Wembley, and it has been a pleasure to show our guests from LOCOG and the IOC what sporting fans all over the world can expect from Cardiff to mark the first home Olympic Games.”

Tickets are available now until Monday 6 February for fans to be part of all the Olympic football action between July 25 and August 10 at the Millennium Stadium via the official website https://www.olympic.org/