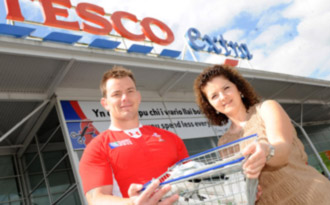 Tickets to watch Wales in the 2012 RBS 6 Nations championship at the Millennium Stadium are available now at Tesco stores throughout Wales.

Welsh rugby fans can buy tickets for £66 at the major supermarket chain to watch Wales versus Scotland on Sunday 12 February and Wales versus Italy on Saturday 10 March at the home of Welsh sport.

With three exciting fixtures set for Cardiff during Wales’ 2012 campaign, fans can take advantage of greater access to rugby tickets and zero booking fees and credit card charges at the customer service desks of the participating local stores.

Head Coach Warren Gatland’s men entertain Scotland on home soil seven days after kicking off their championship at the Aviva Stadium against Ireland on Sunday 5 February and, with Wales set to face England away from home on Saturday 25 February, the squad will return to the world’s greatest rugby stadium for their penultimate match against Italy and a thrilling Championship finale sell-out clash with France in Cardiff.

WRU Head of Sales and Marketing, Craig Maxwell, is proud to be working in association with Tesco to bring Wales’ rugby action closer to the communities that support the game in Wales.

“From that very first weekend in February, rugby fans all over Wales will be showing their support for their national team as the 2012 6 Nations unfolds,” he said. “By taking tickets into local Tesco stores we are appealing to all rugby fans to join the Wales team and be part of the superb rugby action at the Millennium Stadium.

He added: “This initiative does not only provide Tesco customers with greater access to Welsh rugby tickets, it’s also a great time saver for busy-people, offering them the convenience of getting their weekly shop and tickets all under one roof.”

Over 10,000 rugby tickets have already been sold at Tesco stores this season, for Wales’ 2011 Rugby World Cup warm-up clashes and the post-RWC December fixture against Australia in Cardiff.