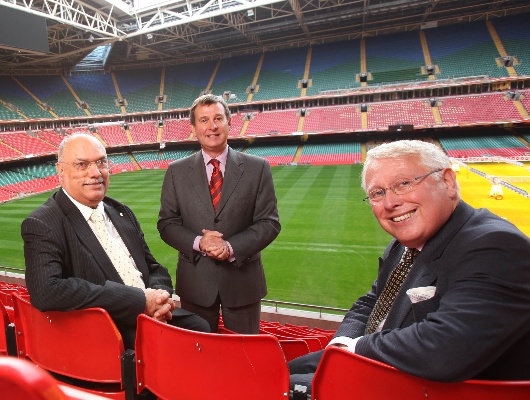 As the countdown continues to the 2012 Olympic Games, the Millennium Stadium welcomed Shadow Minister for Sport Mohammad Asghar AM and Bob Neill MP to the venue today.

The Shadow Minister joined the DCLG Parliamentary Under Secretary of State, who holds special responsibilities linked to the Olympic Games, to take a special tour of the stadium and its excellent facilities ahead of London 2012.

Eleven Olympic football games across both the women’s and men’s tournaments, including the prestigious men’s quarter-final on 4 August and the Bronze Medal match on 10 August, will be played at the venue in 2012.

The stadium is set to kicks off proceedings two days prior to the official opening ceremony, whilst recent announcements have confirmed that both the men’s and women’s GB football teams will play matches in Cardiff.

Welsh Rugby Union Group Chief Executive Roger Lewis said: “The Millennium Stadium is honoured to be bringing the first ever Olympic Games to Welsh soil and to be staging the very first event ahead of any other venue for London 2012.

“This is great news for Wales. Sports fans all over the country will get the opportunity to watch world-class sporting action, and cheer on the GB teams, in the heart of our capital city and the eyes of the world will be on the Millennium Stadium.”

Mr Asghar said: “I continue to highlight the immense and widespread potential benefits for Wales of hosting the very first event of the 2012 Games.

“The Millennium Stadium is a truly fantastic venue and is the perfect setting to kick-off the 2012 Games.

“Efforts must be made to ensure Wales seizes the benefits of this landmark event – linked particularly to tourism, health & wellbeing and levels of sports participation”.

Cardiff’s iconic stadium has a proud history of staging major football events including the FA Cup, Carling Cup and Community Shield and is a great choice for sports fans looking to be part of the London 2012.

In recognition of Visa's longstanding support of the Olympic Games and Paralympic Games, only Visa (debit, credit and prepaid) can be used to purchase tickets.

The Official Draw for the Olympic Football Tournament will take place on 24 April 2012 at Wembley Stadium.