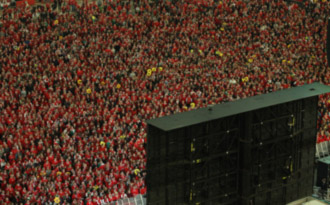 There will be another red hot reception at the Millennium Stadium for the free live screening of Friday’s Rugby World Cup Bronze Final between Wales and Australia.

Share After a record 61,543 rugby supporters packed out the home of Welsh sport for the semi-final clash with France, the WRU are inviting fans to show their support for Wales as they battle it out for third place in the IRB world rankings.

Free tickets for the Wales versus Australia screening will be available to download at https://www.wru.wales/ from 4pm today and for collection at the WRU Store on Westgate Street in Cardiff from 10am tomorrow. Fans can claim four tickets per person.

The Millennium Stadium is expected to raise the bar for 2011 Rugby World Cup attendance figures once more with Welsh fans hoping that history will repeat itself, since the 1987 Rugby World Cup Bronze Final when Wales triumphed over Australia in Rotorua.

Wales, currently ranked fourth in the world, will be looking for a big win over second-ranked Aussies for the Bronze medal at Eden Park in Auckland on Friday, while back home tens of thousands of rugby lovers are expected to show their support.

Tickets will be available until midday on Thursday, when event organisers will turn their attention to putting on the biggest and best play-off party in Wales and welcome the world’s largest mobile outdoor screen back to the venue.

“Welsh rugby fans have shown incredible support for the Team throughout 2011 Rugby World Cup and, on behalf of the WRU, the Millennium Stadium will be inviting the nation to back the boys once more at a free live screening of the Bronze Final against Australia,” said Millennium Stadium General Manager Gerry Toms.

“Friday’s match is an important and exciting clash for Wales and the team will be looking for all the passion and support that they know the Welsh rugby fans are capable of at the Millennium Stadium as they face Australia.”

Friday’s free-to-enter event is the first of Wales’ two-leg series against the Wallabies, with both teams set to compete for the James Bevan Trophy at the Millennium Stadium on Saturday 3 December.

For this week’s clash between two of the best rugby nations in the world, the Millennium Stadium gates will open to the public at 7.30am for the 8.30am kick off. Fans can purchase a range of hot breakfast and refreshments options on arrival however the sale of alcohol will be from 9am.

With thousands expected to Wake Up for Wake again this week, fans are urged to plan their travel in advance to make full use of local public transport services into the city centre and to travel in groups, to avoid unnecessary travel disruption ahead of Wales’ biggest occasion this year.