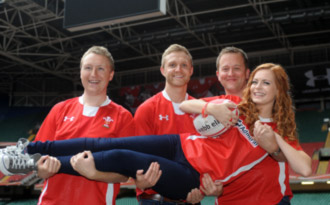 Welsh stars wake up for Wales

Wales’ singing sensations Sophie Evans and Only Men Aloud will join a bumper crowd at the Millennium Stadium this weekend for ‘Wake Up for Wales’, the free live screening of Wales versus France World Cup semi-final.

Andrew Lloyd Webber’s latest star Sophie Evans and Classical Brit Award winners Only Men Aloud will galvanise the Welsh rugby’s celebrations in spectacular style at the unique event, organised by the WRU, which is expected to draw in crowds of over 45,000 rugby supporters.

The special musical guests will merge their vocal talents and their passion for Welsh rugby to unite the crowds in song during the national anthem, as three of the biggest screens in Wales beam the live match coverage from live New Zealand.

Close to 40,000 keen rugby supporters are already booked in for the biggest ever screening of a live match at the Millennium Stadium and fans can still get their hands on tickets (six per person) at Gate 3 Millennium Stadium until 7pm today.

Tim Rhys-Evans, Music Director of OMA, said: “There's such a buzz around Welsh rugby at the moment with Wales reaching the semi-finals of the World Cup and we're so excited to be involved.

“We hope that our involvement on Saturday will not only ignite the passion of the tens of thousands of fans at the Millennium Stadium but also lend our support to the team in New Zealand. Come on Wales!"

Welsh rock band “4th Street Traffic”, who performed at an exclusive event for the Wales squad and their families before they set off for New Zealand, have also been added to the bill promising at least on hour of classic rock tunes and a selection of their own material after the final whistle.

“We are all buzzing about it,” said lead singer Alastair Britton. “It was an absolute honour being asked by the team to play their leaving party and now to be asked to play the stadium for the second time in a matter of weeks is just unreal. Bring on the final next!”

Millennium Stadium General Manager Gerry Toms is thrilled that the event has attracted some of the best music artists in Wales to fire up the crowds at the home of Welsh sport and entertainment.

“The Welsh public are getting extremely excited about Saturday’s big game at the Millennium Stadium,” said Mr Toms. “And the news that we’ve attracted Sophie Evans and Only Men Aloud adds that something extra special to the day.

“The stadium’s speciality has always been sport and entertainment and this weekend promises to be a spectacular fusion of both to celebrate a memorable day for Wales.”

Earlier this week the WRU announced that anyone in possession of a ticket, who wears something red, will be granted free admission for the screening of the semi-final showdown this weekend.

The Stadium will open at 7.30am on Saturday and alcohol will be served from 9am. Fans can access park and ride facilities at County Hall in Cardiff Bay from 7am and parking will be charged at the standard day rate of £3