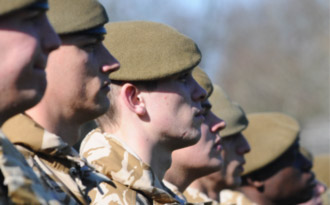 Battle of the Battalions

The match between 2nd Battalion The Royal Welsh versus 1st Battalion Welsh Guards will kick off at 7pm, as part of the stadium’s initiative which offers the venue free of hire charge to 15 local community organisations each year.

Each team is providing a 30-man squad for the match which may be the last opportunity the Welsh Guards have to put their rugby skills into practice before they are sent to Afghanistan as they build up their pre-deployment training.

Rugby Officer for 2 Royal Welsh Captain Dai Davies, said: “We’ve picked up a lot of games lately. We’re trying to get a foothold in Wales by getting some matches against Welsh sides. We’ve played Abercynon and Merthyr recently and they were hard, physical games. Local sides near our base in Tidworth don’t provide the quality for us to play against.

“Playing against the Welsh Guards at the Millennium Stadium is the opportunity to have a match at the home of Welsh Rugby for old and new players. They have the chance to get on the pitch. What Welshman wouldn’t want that?”

Entry to the match is free at Gate 3, near the WRU shop on Westgate Street, from 6pm and food and drink will be available to purchase. A bucket collection on the night will be donated to the Army Benevolent Fund.

Millennium Stadium General Manager Gerry Toms said: “The Welsh Guards and their families are huge Welsh rugby fans and so there is no better venue for The Army Rugby Cup final than the home of Welsh sport.

“The free-to-enter game promises to be a great occasion not just for the friends and families of the two teams but for anyone who wants to support the Army Benevolent Fund while enjoying an exciting rugby final in the Millennium Stadium.