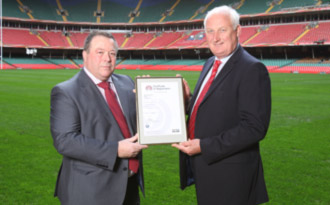 The Millennium Stadium was recognised as the UK’s first sustainable event stadium during an official certificate presentation at the multi-event venue today.

The certificate from BSI for BS 8901 – the British Standard for Sustainability Management Systems for Events – rewards the venue’s management of the social, economic and environmental impact of stadium events.

Gerry Toms said: “The Millennium Stadium is the industry leader for the sustainable management of events and it is an honour to receive the BS8901 certificate ahead of any other UK stadium.

“The standard is a fantastic achievement for a stadium which was designed and built over a decade ago without the innovative design elements in modern stadia and demonstrates the huge strides taken by the organisation to improve its sustainable credentials.”

Mark Bohun said: “Anyone involved in organising and managing events needs to understand the implications of their businesses and then implement strategies to enable their business to respond in a more sustainable way.

“BS 8901 requires organisations to identify and understand the effects that their activities have on the environment, on society and on the economy both within the organisation and the wider economy; and put measures in place to minimise the negative effects as demonstrated by the Millennium Stadium.”

Facilities Manager Darren Crossman heads up the organisation’s sustainability bid which was launched in September 2010 and has prompted savings through reduction of waste, lower energy use and re-use of equipment and infrastructure.

“Achieving certification to BS 8901 demonstrates that by making changes in the way we run our business, the Millennium Stadium has improved the social, environmental and economic impact of our events,” said Darren.

The stadium’s unique palletised pitch system has played an important part, with rainwater harvesting below the grass beds, the re-use of root zone and the recycling of the 40mm rye grass turf in rugby clubs throughout South Wales.

Additional design elements include infra red controls fitted in the urinals to prevent unnecessary flushing, meters to monitor energy and water consumption, new LED lighting and lighting controls and alternative methods of water heating to allow boilers to be shut down in summer.

The stadium has also implemented various operational initiatives such as the promotion of public transport on event day and the Community Events initiative which allows 15 local charitable and community organisations to use the venue free of hire charge.

The Millennium Stadium Charitable Trust has distributed £3million worth of grants to more than 650 groups throughout Wales since it was formed in 2001. Meanwhile the stadium’s major events have attracted more than one billion pounds into the south east Wales economy.