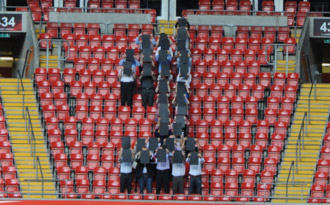 One year to go for Olympics

The team took a short break from their desks to create a giant number 1 in a section of the 74,500 seat stadium to mark the momentous 365 day countdown.

The home of Welsh sport will host 11 games in both the Women’s and Men’s football tournaments between 25 July and 10 August, 2012, with two Women’s matches kicking off proceedings in Cardiff ahead of the opening ceremony at the new Olympic Stadium in London.

Included among the five Men’s matches will be a quarter-final on 4 August and the Bronze Medal match on 10 August. It means the eyes of the sporting world will be firmly fixed on what happens at the Millennium Stadium, Cardiff and Wales for all bar two days of the Games.