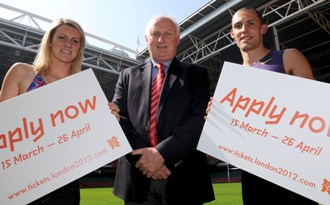 More tickets for London 2012 Olympic football matches at the Millennium Stadium will be available from tomorrow, for fans that missed out on the first draft.

The second round of tickets sales will start tomorrow at 6am and finish at 6pm on 17 July and London 2012 organisers have announced that availability is highest for football, which makes up 1.7 million of the remaining 2.3 million tickets.

Cardiff’s Millennium Stadium is set host eleven world-class football games across both the women’s and men’s tournaments, including the prestigious men’s quarter-final on 4 August and the Bronze Medal match on 10 August.

And the eyes of the world will be on Wales for the very first event of the 2012 Olympic Games on July 25, with two women’s football matches set for Cardiff ahead of the opening ceremony in London.

“The Millennium Stadium is an excellent choice for sports fans wanting to be part of the greatest sporting show on earth, with organisers announcing special prices and larger availability across Olympic football events,” said Millennium Stadium General Manager Gerry Toms.

“Our city-centre stadium can hold crowds of up to 74,500 per event and has attracted a total of eleven football events, including the first Olympic event of London 2012 and the men’s quarter final and Bronze medal match.

“I urge all sports fans to take advantage of this second opportunity to get hold of tickets for world-class football at the Millennium Stadium and apply to be part of the London 2012 action in Wales.”

From tomorrow, tickets will be on sale at a range of price categories, and across a range of sports and LOCOG have confirmed that the first ten days (until 6pm on 3 July) will be open exclusively to the people who applied in the initial application phase but were not allocated any tickets.

Applicants who received tickets in the first round of sales will also get another chance to purchase tickets in the second round from 6am on 8th July to 6pm on 17 July.

The second round of sales will use a ‘first come first served’ application system. Applicants will be notified whether their request for tickets has been successful between 24 and 48 hours after the request is submitted. Payment will be taken after the 10 day process, over a period of up to four days – and applicants will then be notified that the transaction and ticket purchase is complete.