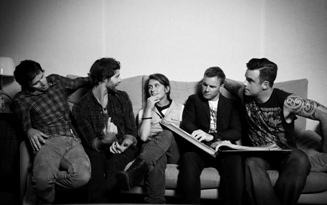 Take That Progress at Millennium Stadium

Gary, Howard, Jason, Mark and Robbie thrilled fans with two stunning performances in Cardiff on their biggest ever tour and the first time they have toured together as a five-piece since 1995.

Progress Live 2011 will see the band play to almost 1.5 million people around the UK and the Millennium Stadium General Manager was thrilled to welcome over one hundred thousand concert-goers to Cardiff.

“It was an absolute pleasure to welcome 129,000 Take That fans for two unforgettable shows on the band’s sell-out Progress Live Tour to the Millennium Stadium,” said Mr Toms.

“The atmosphere in the stadium and around the city-centre was outstanding and the concert-goers themselves were extremely well-behaved and enthusiastic from the moment they began forming queues outside the gates, throughout a stunning stage performance and until the time they left.

“The band’s reunion tour was an extra special occasion for the fans, many of which will remember sell-out Robbie Williams gigs in 2001 and Take That concerts in 2006 and 2009 at the Millennium Stadium, and there was an electric feel-good atmosphere once again in Cardiff.

“Any concert at the Millennium Stadium, which has become a must-play venue for some of the biggest live music acts, is always a memorable occasion for fans.”

The Millennium Stadium, which is wholly owned and operated by the Welsh Rugby Union, is proud of its reputation as a world-class multi-event venue thanks to its city-centre location, fully-retractable roof and removable pitch.

Take That kicked off the tour at Sunderland’s Stadium of Light last month before heading to the City of Manchester Stadium and Cardiff’s Millennium Stadium for what Robbie called “the best stadium” on the tour so far.

“Sunderland was good, Manchester was good, but this is different,” said Take That’s prodigal son.

And it was not only the famous pop icons that enjoyed the show, with Stadium staff receiving hoards of praise from the fans that played a vital part in the success of the concerts.

“I thought I would write to congratulate your staff – an excellent evening made even better by their behaviour and attitude,” said one letter to Gerry Toms from a fan who attended the concert.

“I attended the Take That concert at the Millennium Stadium and I wanted to convey to the relevant people how impressed I was with the organisation of the event and the staff, particularly the stewards.

“From entering through the turnstiles and having our bags searched to getting to our seats via the bar (manned by very fast and efficient, smiling young girls) everyone was polite, happy and courteous.

“I was also impressed by the fact that half the time spent at the venue was not spent queuing for the toilets.  All these little things just show that someone is actually thinking about the paying customers and it should not be unmentioned.”

And the emails have also been flooding in to the hospitality department at the Welsh Rugby Union headquarters in the Millennium Stadium.

“Ladies, just want to thank you for a great evening last night. We all enjoyed the hospitality and the show and look forward to booking with you again in the future,” wrote one long-term box-holder.

While a first-time visitor to the Stadium wrote: “Thank you for arranging everything for us last night, we all had a fab time. The show exceeded our expectations from start to finish and when the crowd sang the national anthem it was just amazing!  My mother has told me about five times today to make sure I say thank you so, thank you!”