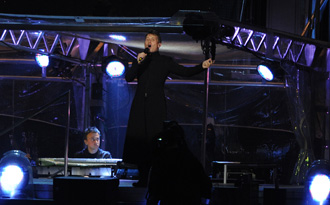 Take That fans will Never Forget the Greatest Day their pop idols hit Cardiff with their hugely-anticipated Progress Live Tour at "the best stadium" – according to Robbie Williams.

The biggest selling UK tour and the first time the band have toured together since 1995 attracted 64,000 revellers to the iconic Millennium Stadium last night and the Pretty Things will wake with No Regrets after a sensational stage performance.

The evening kicked off with a medley of Gary, Mark, Howard and Jason’s finest material before Robbie rocked the crowd with a solo selection of the appropriately named Let Me Entertain You, followed by more of his biggest hits – Rock DJ, Come Undone, Feel and Angels.

At around 9pm, Patience paid off for Take That enthusiasts and the band revealed themselves as a five-piece above giant waterfalls and a incredible acrobatic display for the chart-topping reunion hit The Flood which featured Gary Barlow and Williams on lead vocals.

The fab five continued to treat the sell-out crowd with an assortment of old and new tracks such as SOS, Underground Machine and a memorable piano medley of Everything Changes and Back for Good under the open roof at the impressive live music venue.

A crescendo of classic pop tunes and their accompanying dance moves provided the highlight of the evening when 128,000 hands where flung in the air for Never Forget and there was an extra special Progress Live Tour appearance from the giant robotic 'Om' character.

It was a memorable raise-the-roof performance of Relight my Fire that dazzled the crowd with an unforgettable pyrotechnics show before Take That praised the Cardiff crowd and said ‘Good Night’ for day one of their two Millennium Stadium shows with Eight Letters.

Between them, Take That and Robbie Williams have sold over 80 million albums, had 13 number one albums, 17 number one singles, played to over 14.5 million people live, won 19 BRIT Awards, eight MTV awards and five Ivor Novello awards.