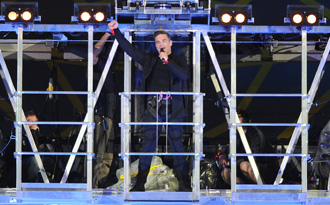 Take That fans who missed out on tickets to the Progress Live 2011 Tour can get their hands on tickets to tonight’s show in Cardiff after a limited number of extra tickets have been released and are on sale now.

The hugely-anticipated live shows celebrate Take That’s biggest hits from the last two decades and see Robbie take to the stage to perform songs from his incredible chart-topping solo career.

The band are expected to play to almost 1.5 million people around the UK on what will be their biggest tour yet and the first time Gary, Howard, Jason, Mark and Robbie have toured together as a five-piece since 1995.

Tickets are on sale now via www.gigsandtours.com and www.ticketmaster.co.uk and to personal callers at the Millennium Stadium Box Office located in Cardiff Arms store on Westgate Street next to Gate 3.

A ticket collection point will also be open all day at the Box Office.