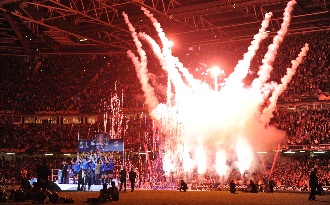 The Millennium Stadium played host to a remarkable Heineken Cup final as Leinster were crowned 2011 kings of Europe with a 33-22 triumph over Northampton Saints.

The 2009 Champions had looked down and out at the interval after Northampton Saints had raced into a 22-6 lead thanks to tries from Phil Dowson, Ben Foden and Dylan Hartley.

But Leinster launched an unbelievable comeback to clinch a second Heineken Cup title.

Both sides showed shaky nerves in the opening exchanges but it was the Saints that took the lead on six minutes.
Callum Clark made the initial inroads before off-loading to back-row partner Phil Dowson to score. Myler slotted the touchline conversion to hand the Aviva Premiership outfit a 7-0 lead after as many minutes.

Leinster hit-back through the boot of Jonny Sexton on 13 minutes to cut the deficit to 7-3. But Myler quickly restored the seven point advantage after the Saints' flexed their muscle at scrum-time.

The Saints were dealt a blow on the 25th minute when Brian Mujati was sent to the sin-bin, but they remarkably still held the upper hand in the scrum despite their numerical disadvantage.

The Saints demonstrated their forward prowess on the half-hour mark when their seven-man pack won a scrum against the head. And they made Leinster pay with their second try.

Myler went close to scoring with a half break and the ball was recycled and spread to Foden, who beat O'Driscoll to score. Myler added the extras to hand his side a 17-3 lead.

Again Sexton quickly responded through the boot but Northampton ended the half the way they started with their third try thanks to a close range effort from captain Hartley.

Myler struck the post with his conversion but the try handed the Saints 22-6 half-time lead.

Leinster came out firing in the second-half launched a comeback with a try from Sexton, which he converted to bring the Dublin province back to within nine-points at 22-13.

Leinster appeared to have grabbed a second on the 50th minute but Gordon D'Arcy's effort was ruled out by television match official Giulio De Santis following some sterling defensive work from Diggin and Lee Dickson.

But the boys in blue got the crucial try on 52 minutes, once again thanks to Sexton. The Ireland fly-half performed a trademark loop-around Jamie Heaslip and defied the defenders to score.

Sexton converted the try and slotted two penalties to extend his personal tally to 26-points and hand Leinster the lead for the first time.

Moments later Nathan Hines powered over for a third try as Leinster ran riot and Sexton maintained his 100 per cent record with the boot to bring the score to 33-22. And the Irish province hung on to clinch a second Heineken Cup crown.