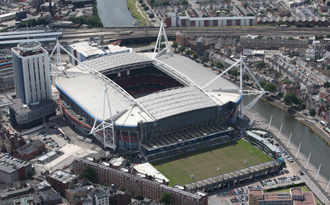 With one year to go until the Olympic Flame arrives in the UK, the London Organising Committee of the Olympic and Paralympic Games (LOCOG) today revealed that Cardiff will welcome the Olympic Torch Relay on 25th May next year.

The Olympic Flame will arrive in the UK from Greece for a 70-day Olympic Torch Relay ahead of the greatest sporting occasion in the world which kicks off with Olympic football at the Millennium Stadium between July 25th and August 10th 2012.

Starting in Land’s End on 19 May 2012, the Olympic Flame is expected to travel an estimated 8,000 miles around the UK giving thousands of communities and individuals their moment to shine as the Olympic Flame comes to a place near them.

The search will begin today at 11am for the 8,000 inspirational Torchbearers and, once the detailed route is confirmed later this year, it is estimated that 95% of the population will be within a one hour journey time of the London 2012 Olympic Torch Relay

Sebastian Coe, Chair of LOCOG, said: “The Olympic Flame will shine a light right across every Nation and Region of the UK and showcase the very best of who we are and where we live. The first locations on the route confirmed today give a flavour of the reach the Olympic Torch Relay will have around the UK and how extensive the opportunity for starting to celebrate the London 2012 Olympic Games will be.’

The Millennium Stadium will host eleven games during London 2012 Olympic Games across Women’s and Men’s football tournaments, including the prestigious Bronze Medal match on 10th August.

Millennium Stadium Manager Gerry Toms said: “The Millennium Stadium is thrilled to be part of the Olympic Games in 2012 which offers a once in a lifetime opportunity for all sports fans in Wales to experience Olympic competition in their home nation.

“Today’s announcement that the Olympic Torch Relay will be arriving in Cardiff in May next year adds to the huge excitement across Wales and provides another great opportunity for people to get involved.”

Hugh Robertson, Minister for Sport and the Olympics, said: “The Olympic Torch Relay brings London 2012 to the doorsteps of the UK giving everybody the chance to celebrate the London Games. It’s a magnificent showcase for the country and a chance to mark the achievements of inspirational people in our communities.”

To get involved and find out more about the first places to be confirmed on the route go to https://www.olympic.org/news/london-2012-olympic-torch-relay