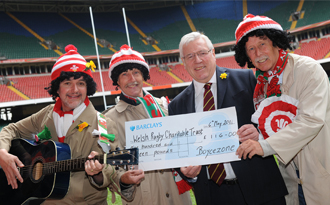 The South Wales trio, Peter Davies, John Watkin and Jeremy Randles, took time out of rehearsals to present a cheque for over one hundred pounds to WRU President and WRCT Trustee Dennis Gethin at Wales’ iconic rugby Stadium.

The WRU President thanked the band for their support, saying: “It gives me great pleasure to accept the cheque on behalf of the Welsh Rugby Charitable Trust and I thank Boycezone for their support of our injured players in Wales,” said Mr Gethin.

He added: “The Trust ensures that all proceeds are spent solely on improving the well-being of severely injured rugby players and having had the privilege of meeting these brave individuals I know that they will be grateful for the support.”

Boycezone have dreamt of singing at the Millennium Stadium since they first sang for Welsh rugby fans on the streets of Cardiff when the world’s greatest rugby spectacle was hosted in Cardiff in 1999.

“Ahead of the 1999 Rugby World Cup in Cardiff, a fellow member of staff at Glan Ely High School suggested that we form a tribute band to raise money for a charitable cause close to his heart,” explained band member Peter Davies from Ammanford.

“Come the World Cup, there we found ourselves singing for the fans and raising up to one thousand pounds for charity and it really snowballed from there.”

He said: “From the very beginning it was our goal to play at the Millennium Stadium and we were thrilled to get the opportunity to sing for the crowds on the concourse when Wales played Ireland.

“We had a fantastic day together as rugby fans, we even got on to the pitch to get our picture with the Royal Welsh Regiment band, and it is therefore our pleasure to be donating this money to a local charity with rugby at the very heart of it.”