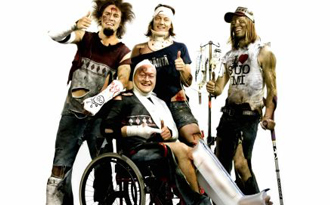 Monster Energy Extreme Freestylers have announced that MTV stars the Dudesons will appear alongside some of the best FMX riders on the planet at the Millennium Stadium on Sunday 2 July.

The Dudesons, four totally loveable, yet totally lunatic friends from The Arctic Circle are most universally famous for their MTV show The Dudesons in America.

The series follows the Dudesons as these Nordic nutters perform insane and unique stunts and pranks across the US of A. It is co-produced by Jackass legend Johnny Knoxville.

The Dudesons have received widespread critical acclaim since their international career was launched in 2006. They also featured alongside fellow madman and good friend Johnny Knoxville in the hit movie Jackass 3D.

However, Jukka, Jarppi, HP & Jarno have been performing hilarious and crazy stunts since their early teens. They’ve appeared on Finnish TV since 2001 and internationally from the mid to late ‘Noughties’. They are seasoned professionals and have accumulated an army of fans worldwide.

That is why the promoters of Monster Energy Extreme Freestylers presented by Extreme Sports Channel are thrilled to have the Dudesons on board and believe that their presence will further enhance a tour that is already bursting with variation.

The Monster Energy Extreme Freestylers tour goes far further than any FMX tour has gone before. It not only offers one of the greatest rider line ups ever assembled, the tricks on dirt bikes, snow mobiles and quads they’ll perform will be fully choreographed to live music, dancers, pyrotechnics, lights and much more.

The astonishing array of talent on show is combining purely to entertain and to produce a spectacle that cannot be witnessed anywhere else on earth.

The Dudesons will add the icing on this crazy, jaw-dropping, mind blowing, mouth watering cake that is the Monster Energy Extreme Freestylers Rock N’ Ride Tour 2011.

Make sure you tuck in and get your tickets now from Ticketmaster at https://www.ticketmaster.co.uk/ or 08442 777 888 and watch an exclusive video of the Millennium Stadium launch of Monster Energy Extreme Freestylers at https://www.wru.wales/